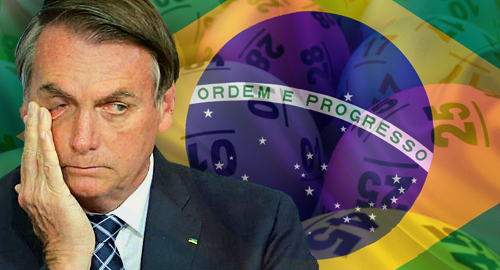 Brazil’s lottery operators are engaged in a legal war with their country’s mercurial president over whether they must continue operating during the COVID-19 pandemic.

Earlier this month, some Brazilian states ordered the shutdown of local lottery retailers in a bid to minimize further transmission of the COVID-19 coronavirus. The Loterias Caixa unit of the Caixa Econômica Federal state bank ordered a three-month halt to Federal Lottery draws to prevent customers from going out to buy tickets.

Last Wednesday, President Jair Bolsonaro issued an amendment to a decree intended to ensure the continued operation of ‘essential’ businesses. The amendment added lottery retailers (and later, churches) to the list of sectors that are considered “indispensable to meet the urgent needs of the community.”

Bolsonaro (pictured) subsequently claimed that the “armored” glass separating lottery retailers from their customers would ensure that “the virus will not pass.” The president added that the “neurosis of closing everything is not working” and the government needed lottery revenue to ensure it could pay for COVID-19 mitigation efforts.

Caixa then issued a notice that it wouldn’t penalize any lottery retailer who chose to remain closed in defiance of Bolsonaro’s decree. Caixa also urged lottery players to check out its new digital lottery portals to avoid the risks of stepping outside one’s door.

BOLSONARO FLIP-FLOPS ON CASINO LEGALIZATION
Bolsonaro is often referred to as Latin America’s Donald Trump, based at least in part on their shared disdain of opinions offered by egghead experts with fancy degrees from hifalutin colleges. Bolsonaro and Trump also share a fondness for turning on a dime and taking positions that directly oppose previous public statements.

Case in point: while Brazil is tentatively pressing ahead with plans to legalize online and land-based sports betting, Bolsonaro recently poured cold water on the issue of legalizing land-based casinos in an interview with a local television station.

Bolsonaro, who previously said he personally opposed legalizing casinos but would leave the final decision up to individual states, now claims that the casino question is “exclusively up to the executive branch.” Bolsonaro added that his administration wouldn’t initiate casino legalization talks, based on his view that casinos are hubs for money laundering.

RIO RACING LOSES BID TO REOPEN
Meanwhile, some members of Brazil’s racing industry are bemoaning a failed bid to convince the powers that be to lift the coronavirus-related moratorium on racing. Turf professionals in Rio de Janeiro made a plea to reopen the Gávea racecourse for at least one meeting per week, as has been permitted at the Cidade Jardim track in Säo Paulo.

Unfortunately, the Jockey Club Brasiliero rejected this request, citing the state government’s social isolation orders and World Health Organization guidelines. The notice added that the situation would be “reassessed” in the event of a change in the current scenario.