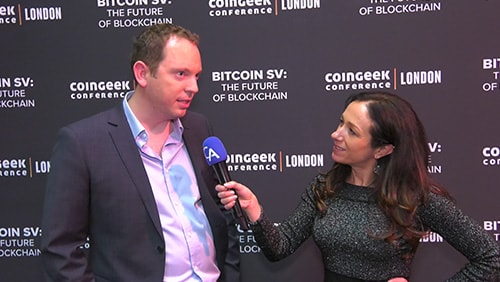 The Tokenized protocol is promising to bring a whole world of Bitcoin SV (BSV) commerce and contracts to enterprise usage, and the gambling industry will not be left behind. James Belding, founder and CEO of Tokenized, joined our Becky Liggero Fontana on the sidelines of CG London to discuss the specific ways gambling can benefit from BSV smart contracts.

For anyone still unfamiliar with the Tokenized protocol, Belding can sum it up pretty succinctly. “Within that protocol, you can issue smart contracts and tokens that represent different assets,” he said. “So an example of one that might be interesting to gaming companies is a casino chip token.”

The casino chip token isn’t just a theoretical thing, one company is already putting it to use. “So it represents basically a value in a particular currency, but it’s controlled by the casino itself and they can do with it what they will,” Belding explained. “So this can be used an online gaming, but it also be used in real-life casino games, and there’s actually a company called Bitboss out there that’s actually done a proof of concept with our protocol, and they’ve done a, I think it was roulette, online roulette, and they use a casino chip protocol.”

One of the road blocks to greater adoption of BSV technology has been a lack of skilled coders who can work with it. Tokenized is trying to bridge that gap. “So it is a little bit technical now, with the protocol, if you want to interact with it directly like Bitboss has,” Belding admitted. “But we’re soon coming out with some software, so the API, things that make it a lot easier. So we can basically handle the wallet components for them, but that is a little bit of time off, but it’s the time now to start investigating and thinking about how you can integrate it in your platforms, absolutely.”

These kinds of smart contracts aren’t just benefiting the operator, Belding noted how Affiliates have a lot to gain from the system too. “Paying out to affiliates can be done on a per action basis, which is one thing that might be value to them,” he said. “What it means is basically, a lot more transparency, so if affiliates know that they’re actually getting paid fairly, and they’re getting paid timely, like as it happens rather than accruing and get paid on settlements at a later date, so it has value to them. But I think the biggest thing will be about building trust with the affiliate programs, and knowing that their platforms are doing the right thing, and paying them fairly.”

Liggero Fontana pointed out that there’s no lack of competition in the blockchain world, and asked Belding why BSV is the best choice for operators. “Well it comes down to the basics: It’s faster, cheaper, and it can scale,” he said. “So it can scale to any transaction capacity that they need. And none of the others can do that. It’s a basically an order of magnitude better than the other blockchain out there, at least.”