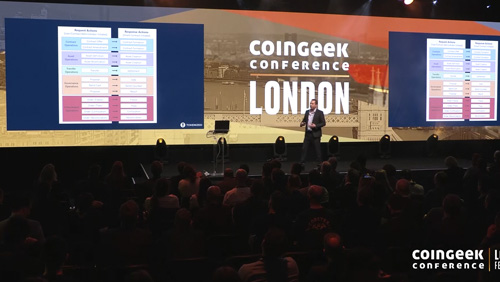 We’ve previously seen how Bitcoin SV can become both the payment system and data layer for gambling operators, improving the efficiency of both and ultimately, the company’s bottom line. On February 20 at CoinGeek London, Tokenized CEO James Belding took to the stage to explain how his company can marry both pieces to create an end to end product for any company. Belding began by describing the current status quo for most companies. Transactions are generally bundled, and settled in a “netted” system, where a third party takes on the risk of finalizing a transaction between two parties. “Bitcoin will become the ‘real-time’ gross settling system,” Belding declared. He explained:

“The exciting thing here is every single transaction, even at point of sale, retail, payments, financial instruments, everything can be done on a gross basis, and we no longer need these netted settlement layers.”

This can be done thanks to the speed, efficiency, and low cost of using the BSV blockchain, but also through the advanced capabilities of smart contracts to define terms. Contracts, coded to the blockchain, will signal when terms are met and pay out the involved parties accordingly. Oracles, Belding explained, work as a messaging system, defining the legal status of ownership of tokens. The result is that BSV becomes a universal source of truth for data records.

This works for all of the various groups that are typically involved in a gambling firm’s operations. “This can affect the contracting parties that are involved in a particular transaction or commercial engagement, but also the auditors, and regulators, and AML, compliance, and everything that’s required, the courts, lawyers, to have a single source of truth,” Belding noted.

Other than being fast and efficient, by removing third parties from the transaction, Belding hypothesized that it also results in a huge cost savings. “When all commercial records make their way onto the BSV network that it would actually be cheaper and as a total cost, it would be less than what it is today.”

The reason Tokenized opted to build this platform on BSV is due not only to its ability to massively scale, resulting in faster speeds and lower costs, but because it is unique in that it achieves the highest scores in data availability, integrity and persistence. It’s had a 100% effective uptime since 2013, Belding noted, and offers an immutable ledger with signatures.

He also talked up some of the features BSV offers that will make every single bet more easily conducted. Microtransactions, combined with smart contracts, means partners like affiliates could be paid out their fair share of every single bet.

This is a great system for operators, but for regulators as well. Smart contracts guarantee compliance, keeping companies from ending up in monetary disputes, by virtually guaranteeing that every transaction is conducted within the bounds of the law and existing agreements.

Tokens will have many different actions available to them on Tokenized, Belding noted. This includes options that will be attractive to corporate firms, like shareholder voting, but also pieces that are required for regulatory compliance, like the freezing and confiscation of funds.

As Belding broke down the different pieces that can make up a contract, the event oracle seems particularly useful for gambling operators. It can monitor events, with Belding noting sport matches specifically, to help determine the outcome of a contract.

Tokenized isn’t available to the public yet, as Belding noted they want to receive all the needed licenses to be ready for corporate use right out the gate. Otherwise, the company is currently working on internally releasing their e-money layer, which when it would finally release to the public, would remove BSV from the tech stack. Companies will be able to settle all of their transactions in the currency of their choice without ever having to take on the risk of buying Bitcoin.

Tokenized might not be custom built for a gambling operator’s needs, but all the right features are there for a firm to advance to the next level with. By using the technological superiority of the BSV blockchain, and the sophistication of Tokenized’s system once it’s available, any operator can start realizing the benefits of a fully BSV world.

Check out James Belding’s full presentation below, and see how the BSV blockchain could soon change how your payments are settled.