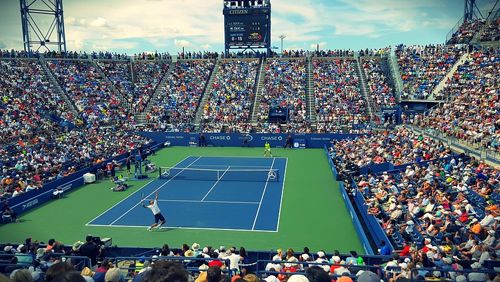 Between those greats retiring and the current ‘Holy Trinity’ taking over the mantle as greats who would sweep all before them, however, there was a fantastic yet often overlooked period of tennis, dominated by three Americans – Pete Sampras, Andre Agassi and Jim Courier. Between then, the trio won an incredible 18 Grand Slam titles. We start our look at the American sharpshooters with a look at the man known as ‘Pistol Pete’.

It’s hard to summarise Pete Sampras’s legendary success in tennis from the viewpoint of the present day. In terms of Grand Slams, ‘Pistol Pete’ – so named for the rapid-fire first serves that were constantly fired across the net – Pete Sampras won 14, a number by all of Djokovic (17), Nadal (19) and the current ‘greatest of all time’ Federer (20). Back in 2002, when he retired, however, Sampras was the man.

Blessed with the kind of serve that every other player of the age envied, Sampras burst onto the scene as a pro into 1988, having been born to a Greek father and a Jewish mother in Washington and played tennis since the age of three.  His first Grand Slam title came in 1990, however, when he won the U.S. Open, an event he would go on to win a record five times in the Open era.

Sampras also won two Australian Open titles, but never won the French, his game being not just based on serve-and-volley tactics, but utterly reliant on them. It was the age of serve and volley merchants, players like Michael Stich, Boris Becker and Stefan Edberg. Sampras came on the back of Boris Becker mania, and rather than think of a way to work around the leader of the pack, Sampras put the long hours into becoming better than any of his rivals at the single greatest advantage he believed a tennis player needed.

“You Live and Die by the Serve”- Pete Sampras

As he would say, Sampras lived by it. His serve was flat, hard and at times, unreturnable. Service games weren’t under threat, increasing the pressure his opponents felt on their own serve. He had a phenomenal ‘slam-dunk’ smash that sent opponents scurrying to the fringes of the court in hopeless pursuit of the unreturnable shot.

It wasn’t that Sampras was a great all-rounder, he wasn’t, as evidenced by his failure to ever win at the French clay of Roland Garros. His gift was in mastering one skill to the nth degree. Sampras knew that his own serve was almost unbreakable. That meant he would always get more chances on his opponents serves.

‘Pistol Pete’ wasn’t just fast at serving. Returns were smacked back into court, not always making the corners, but being struck at such speed that he return them well took not only a great deal of skill in the action of getting a racquet on the ball, but in the physical demands each Sampras made of the body in getting to the ball. Few managed it during his glory years, and between 1993-1998, he finished every year as the world number one player, a feat that has never been and probably never will be surpassed.

Sampras’ retirement came in 2002, but he was effectively retired by one dramatic match, which took place at the 2001 Wimbledon Championships when Roger Federer, aged just 19, beat his hero in a truly era-defining victory.

Pete Sampras’ domination of Wimbledon saw him win seven Championships, a record that has only been surpassed by Roger Federer, who won his eight and possibly final Wimbledon title in 2017. Sampras retired having exceeded his hero Rod Laver’s Grand Slam haul, the American winning 14 to the Australian’s 11 titles.

Pistol Pete may have run out of bullets, but the best cowboys live on in legend and Sampras deserves all the plaudits from an era he helped define.

Next time, we’ll look at one of Sampras’ eternal rivals, and a man who in many ways played the opposite game to his rival, Andre Agassi. He had so many difficult shots to face from the phenomenal Pete Sampras: