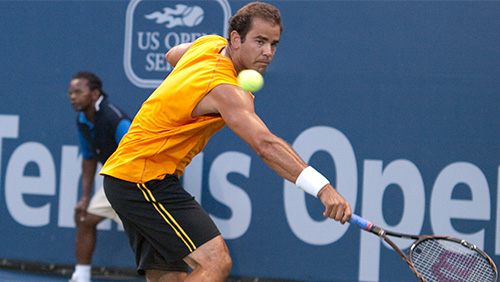 Some tennis matches will be remembered forever purely on the basis of the self-contained entertainment the game itself produced. Think of Andy Murray’s first Wimbledon title, or even others go further, defining the era within which they took place.

Very few games illustrate the passing of one era and the incoming new one within the same few sets of tennis magic. ‘Pistol’ Pete Sampras and Roger ‘Fed Express’ Federer only met once in competitive tennis, but they shared one such game.

It was 2001, it was the 4th Round at Wimbledon and it was the kind of day that games at SW19 are made for. A static heat hung in the air. There would be no delays, no reprieve for either combatant in fallow periods.

The opening set went the way of Federer, in a nerve-shredding tie-break. The second set was more of a formality, the pundit’s prediction – Pete Sampras grabbing a break, serving it out with an almost apologetic certainty. ‘Sorry I have to do this to you’, he seemed to say after each point. Still, the kid took a set off him, the crowd might have thought. Then he took another one. Federer shot down Sampras in a way the American famed for his ‘star-smash’ might have done.

Despite going two sets to one up, Federer was, at one point, 1/12 for breakpoints taken, a statistic that seems alien to the man we know he became and the champion who became known for being ruthless. But this was Sampras, ‘Pistol Pete’ no less, and he wasn’t going to be shot down with one bullet. Nor was he going to be beaten in four.

Sampras simply refused to go anywhere, despite his hairline seeming to recede with each passing serve. He was a seven-time champion, having won in each of the last eight seasons except for the year of his shock defeat to Richard Krajicek in the 1996 quarter-finals.

After four sets, it was two sets all, a blistering tie-break from Sampras leveling both the game and Federer’s expectations. It was 24 games each, too. The two men were impossible to separate and would require one more set to do so. Both looked like they’d barely broken sweat, when in reality, they had been toiling in the British summer heat for three hours.

The fifth set looked to be a long one when, on serve, it was 6-5 to Federer. Sampras would serve to hold. Everyone knew it, except Federer. He knew that he could break to win the game, set and match. And that is exactly what he did.

The final game on Sampras’ serve was so vividly representative of an era passing that you can see it in every point. The trademark Federer forehand return was born in the most intense of circumstances for 0-15, the short step and punch into the back of the court so fast Sampras couldn’t get on his toes.

A point later, it got even worse for the reigning champion. An uncharacteristic volleyed error from Sampras for 0-30. A glance to the box from the American, then back to the court with a sickly grimace as if he could see the hunched figure of Death itself crouching as a line-judge, ready to wield the scythe.

Federer, implacable all match, could sense it. His breathing became forced for a moment, blown hard away from him in preparation for the next vital point. Consequently, his next return slithered into the ground in front of his feet. Sampras, suddenly unreturnable again, unbeatable on his serve, could also sense the stumble from his young opponent. Federer berated himself, his eyes rooted to the Wimbledon turf, knowing the game was still there for the taking.

Sampras, his service action so fast many opponents blinked and missed it, gave a look across the net, as if to imply the inevitable comeback was in his power. His next serve was strong, but it came right back at him, and his feet wouldn’t adjust quickly enough. The racquet, unable to rise rebounds the ball into the tape. 15-40.

Two match-points. The brink of history, and the crowd inside Centre Court edged forward like a hungry beast that must be sated to retreat.

The serve was good. In fact, it was better than good. Wide, low and flat. Against anyone else Sampras might have faced, it was a clean winner. But this is Roger Federer becoming the Fed Express, and his motion is all as one; the step out, the forehand down the line nestling into the corner of the court. Federer, knowing the shot was a clean winner the second it left his racquet, sank to his knees in the same fluid motion.

It was over and Federer had done it.

After the handshake, Federer sat with his head in his hands, the 19-year-old in tears at his achievement. Sampras, spent, simply packed up his racquets.

For a few moments, Federer seemed to have no idea where he was as he packed up his kit. Eventually, the two men trooped off court together, Federer at first forgetting to bow, then, aligning himself with Sampras in his actions, stepping into the older man’s slipstream. While Sampras left the court immediately, Federer, taking the baton, signed autographs and waved politely to the crowd, assuming the role of the man he had defeated.

Between 1993 and 2000, Pete Sampras won seven out of the eight Championships at Wimbledon. While Roger Federer would fall short in 2001, he would eventually win in 2004, and embark on a run that saw him win his eighth Wimbledon Championship in 2017, one more than ‘Pistol Pete’ managed.

Watch the highlights of that incredible day in the sun for tennis as a sport right here: