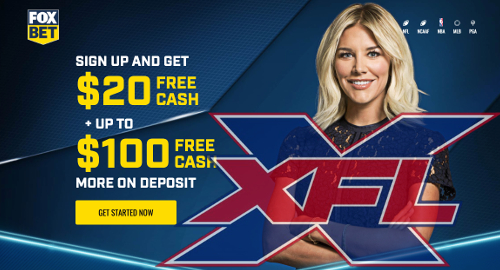 Fox Bet is the latest official gaming partner of the XFL, which claims it’s the only football league “geared to the sports betting future that is coming fast.”

On Friday, the XFL announced that the Fox Bet joint venture of The Stars Group and Fox Sports Network was the upstart football league’s latest authorized gaming operator. Fox Bet joins DraftKings, which signed both sports betting and daily fantasy sports partnerships earlier this week, while FanDuel announced a DFS deal with the XFL on Thursday.

The deal allows Fox Bet to incorporate official league data, team logos, player and coach likenesses and ‘certain league content’ via the Fox Bet sports betting platform and the Fox Sports Super 6 free-play game. The revived XFL, which operated for one extremely flashy but ultimately doomed season at the turn of the century, will kick off its new 10-week season this Saturday with broadcasts on Fox Sports and ABC/ESPN.

These broadcasts will break new ground in the US sports world by incorporating betting odds both onscreen and via the play-by-play commentary. That said, the commentators will likely include caveats that only viewers in states that have authorized legal betting – and only nine of those states have so far authorized XFL betting – should be placing wagers.

On Friday, the Associated Press quoted XFL president Jeffrey Pollack saying the league was “embracing the [betting] spread from the start.” Pollack called sports betting “a core business strategy” of the XFL, an acknowledgement that a lot of football fans view betting “as essential to the game experience as the helmet, ball and jerseys.”

ESPN’s senior VP of production Lee Fitting said announcers would walk “a fine line” in discussing betting odds so as not to turn off non-bettors. Referencing odds if a late play covers the spread will be okay, but Fitting said the broadcasts wouldn’t update odds as the game progresses, although this could change as the season progresses.

Only time will tell whether a betting focus will prove enough of a draw to allow this version of the XFL to survive long enough to fill the annual seven-month drought of NFL football. But the NFL already appears to be swimming in the XFL’s wake, having just launched a quest for their first VP of sports betting.