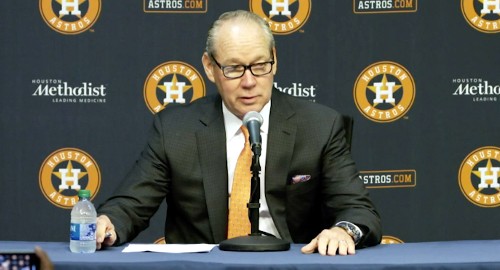 Major League Baseball’s quest for a cut of sports betting revenue has taken a serious blow in the wake of a report into the Houston Astros sign-stealing scandal.

On Monday, MLB suspended Astros manager AJ Hinch and general manager Jeff Luhnow for the 2020 season due to their roles in the team’s stealing of opposing team’s pitching signs during the 2017 season. The Astros organization was also fined $5m, the maximum allowable fine in this situation, and will forfeit their first- and second-round draft picks in both the 2020 and 2021 MLB Drafts.

Shortly thereafter, Astros owner Jim Crane held a press conference in which he announced that the team had dismissed both Hinch and Luhnow. Crane (pictured) explained his decision to go “above and beyond the MLB penalty” in order to “move forward with a clean slate” and “become a stronger organization because of this today.”

The disciplinary action follows an investigation into allegations that the Astros employed a center-field camera linked to a monitor in the Astros’ tunnel at its Minute Maid Park homefield. An Astros staffer would then bang on a trashcan to signal what pitch was coming to the dugout and Astros players on the field.

Crane said neither Hinch nor Luhnow were responsible for starting the sign-stealing efforts, “but neither one of them did anything about it.” Former Astros bench coach Alex Cora (currently managing the Red Sox) was fingered as having helped to set up the system, and while he escaped punishment on Monday, a separate investigation is examining allegations that the Sox also stole signs during the 2018 season.

Neither MLB nor Crane announced punishment on any Astros players following the release of the MLB report. MLB commissioner Rob Manfred effectively said that all Astros players were guilty but none of them were too blame because it was too hard to determine any individual player’s culpability “with any degree of certainty.”

The MLB’s report noted that the Astros’ senior baseball operations executives were given “express notice” that the league would “hold them accountable for violations of our policies covering sign stealing, and those individuals took no action to ensure that the club’s players and staff complied with those policies.”

Manfred said the conduct of the suspended execs had cast doubt on the integrity of the league’s games, causing “significant harm” to public perception of the sport.

The irony here is off the charts, given MLB’s sanctimonious prattling about how it deserves a cut of individual state’s legal sports betting revenue in order to preserve the ‘integrity’ of its games. Clearly, MLB has proven that it has a hard enough time maintaining the integrity of its product without demanding payment for doing such a piss-poor job.

Both MLB and the other major North American sports leagues have since downgraded their focus to the pursuit of a requirement for betting operators to use league-supplied data for in-play betting purposes. So far, only Tennessee, Illinois and Michigan have included this requirement in their respective betting bills.