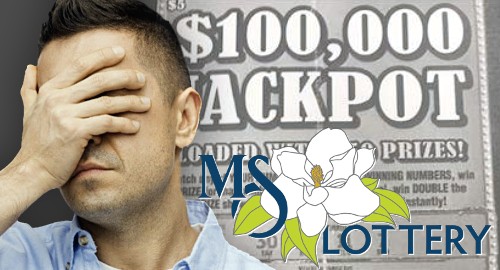 Mississippi’s new state lottery isn’t yet a couple months old and already some hopeless scammers have been caught trying to game the system.

On Monday, the Mississippi Lottery Corp (MLC) announced that two local residents had been arrested after trying to pass off an altered scratch-ticket they claimed was a $100k winner. The pair reportedly showed up at the MLC’s head office in Flowood seeking to redeem their one ticket to paradise, but lottery officials immediately smelled a rat.

Local media quoted MLC spokesperson Meg Annison saying officials quickly concluded that the ticket had been altered by gluing on numbers indicating a $100k winner. Police were called, and Columbus residents Odis Latham and Russell Sparks were arrested shortly thereafter and charged with conspiracy to commit a felony and uttering a counterfeit instrument over $1k, leaving them looking at a potential 20-year prison sentence.

The MLC only began offering numeric draw games and scratch-off tickets in late-November, following the 2018 passage of legislation that finally cancelled Mississippi’s membership in the shrinking club of non-lottery US states. That club now has a mere five members: Alabama, Alaska, Hawaii, Nevada and Utah.

Mississippi’s path to lottery acceptance was not only slow but also exceedingly cautious, as the MLC restricts sales of its products to individuals aged 21 years or older, similar to the age barrier at the state’s brick-and-mortar casino operations. Most other states set the age barrier at a more reasonable 18 years.

So far, over 1,200 Mississippi retailers have been approved to offer lottery products, and Powerball and Mega Millions tickets will be available starting January 30 following Mississippi’s entry into the Multi-State Lottery Association last August.

The MLC said ticket sales over the first five weeks of operation totaled $54m, of which around $11m was kept as revenue. For the first 10 years of operation, the majority of the revenue will go toward repairing the state’s crumbling infrastructure.

Incredibly, Mississippi legislators somehow found the stones to approve both casino gambling and retail sports betting at said casinos before getting around to authorizing lottery operations. Given Monday’s attempted fraud by the not so dastardly duo of Latham and Sparks, legislators’ lotto skittishness was well-founded.