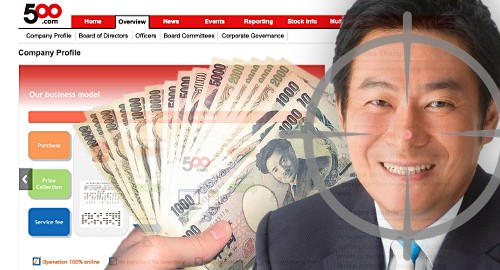 Japan’s casino quest has led to the arrest of a lawmaker from the country’s governing party on charges of accepting bribes from Chinese online lottery firm 500.com.

In an early bid for the title of 2019’s worst Christmas ever, Japanese authorities announced Wednesday that they’d arrested Tsukasa Akimoto, a lower house member of the ruling Liberal Democratic Party (LDP). Earlier this month, news broke that Akimoto’s aides were suspected of bringing in large amounts of cash from overseas without declaring the cash to customs officials.

On Wednesday, the Tokyo District Public Prosecutors Office announced that Akimoto (pictured) had been arrested on suspicion of accepting around ¥3.7m (US$34k) from 500.com, which was at the time pursuing an integrated resort project near Hokkaido. Until a few months ago, Akimoto held a cabinet position with influence over Japan’s casino development process.

Akimoto confirmed his arrest in social media posts, in which he apologized for “causing this kind of situation and such a commotion.” Akimoto continued to deny any wrongdoing, although local media quoted LDP sources saying Akimoto had formally indicated his intention to quit the party to spare it further embarrassment.

Police also arrested three individuals connected with 500.com, including a former vice-president and two Japanese corporate advisers. The company is said to have paid to fly Akimoto and his family to Hokkaido in 2018 and also organized trips for Akimoto to Shenzhen and Macau.

500.com has never operated any land-based casino operations, but the Hokkaido integrated resort bid was part of the financially-struggling company’s efforts to diversify its revenue streams, which were dealt a serious blow in March 2015 when China suspended all online lottery sales.

As (bad) luck would have it, 500.com was scheduled to hold its annual general meeting in Shenzhen on Monday. The company has yet to publish anything on how that meeting went down or whether shareholders voiced any concerns over the company’s involvement in this growing Japanese scandal.

Concerns are mounting within the LDP that the scandal could negatively impact the country’s push to legalize casinos. The Japanese public already views the whole integrated resort movement with suspicion and Akimoto’s allegations clearly won’t help alleviate those concerns.

Local media quoted Chief Cabinet Secretary Yoshihide Suga saying the LDP “will steadily push ahead” with its casino development plans “so that benefits from building [integrated resorts] will be reaped as soon as possible.” Suga also said the LDP would seek to clarify policies regarding what types of contact between casino operators and government officials are permissible.