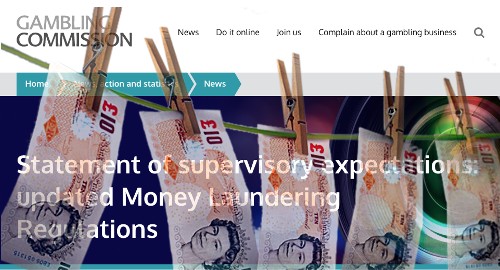 UK gambling operators have been warned to beef up their anti-money laundering (AML) compliance or the regulator will strike down upon them with great vengeance and furious anger.

On Monday, the UK Gambling Commission (UKGC) issued a cheery holiday message to its licensees, reminding them that the European Union’s 5th Anti-Money Laundering Directive is set to take effect on January 10, 2020.

This date will also see the UKGC publish the fifth edition of its guidance for casino operators (both land-based and online) on The Prevention of Money Laundering and Combatting the Financing of Terrorism, which will take effect immediately on publication.

The casino-specific aspects of the UKGC’s new regs include ensuring minimal AML risks from the introduction of any new products, business practices or technology; having specific policies and controls for implementing the above changes and ensuring adequate staff training.

Othe areas of concern include ensuring that customer identity verification is obtained from a “reliable” and “independent” source, and enhanced scrutiny of “complex or unusually large transactions,” particularly if they come from “high-risk third countries” or “have no apparent economic or legal purpose.”

The UKGC acknowledged that implementing changes to company policy takes time, but it still wants to see that licensees have “acted promptly, invested appropriately … and implemented changes with the requisite urgency.”

Frankly, given that the UK has initiated the process of crashing out of the European Union via what promises to be a chaotic Brexit negotiation, operators could be tempted to say ‘sod the EU and its directives.’ But the UKGC has been making expensive public examples of some of its AML-deficient licensees this year – including Betfred, Gamesys, InTouch Games and, the Kindred Group, just to name a few – so this is perhaps not the best time to throw a petulant ‘you’re not the boss of me’ tantrum.