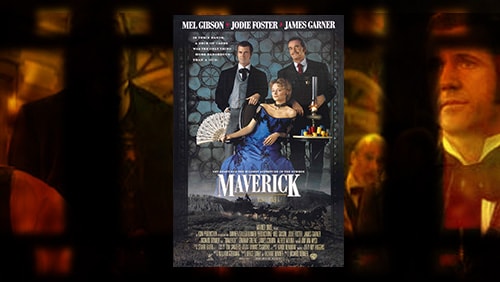 Mel Gibson has been in some turkeys during his career, but he has also been the lead role in many a film buff’s fave. Who can forget Braveheart? Who will ever be able to get a phone call in traffic

without thinking of Payback? Who could assume half a dozen different identities and flee across the country with Goldie Hawn without humming the theme tune to Bird on a Wire? Just us? We can live wit it.

In 1994’s Maverick, however, Mel Gibson was not the only star on screen. A poker movie it may have been, but it wasn’t only poker. The movie had a budget of $75 million, and much of that was spent on the three co-stars, who shared a fairly equal amount of screen time between them. Mel Gibson, Jodie Foster and James Garner were all A-list Hollywood stars in their own right, and they all have a riotous time in the film.

Maverick is essentially two parts The Sting, two parts the best romantic comedy America could put out in the same year Four Weddings and a Funeral redefined that genre and one part a Western. In fact, the late legendary American film critic Roger Ebert referred to Maverick as “the first light-hearted, laugh-oriented family Western in a long time, and one of the nice things about it is it doesn’t feel the need to justify its existence. It acts like it’s the most natural thing in the world to be a Western.”

Everything seems natural in Maverick, from the whip-smart dialogue to Richard ‘Lethal Weapon’ Donner’s effortless direction. But perhaps the best part of Maverick is the poker. While the hands may be ludicrous, as they are in 2006’s Casino Royale, here the cast are playing it for laughs, and they get them time and time again.

Gibson and Foster’s chemistry is genuine and James Garner plays his role with more relish than a burger salesman who lives in a town famed for its tomatoes. The poker is amusing, dramatic and at turns, filled with real tension as the characters play out hands that could leave them either rich or full of holes by the end of the deal.

Maverick remains one of the top 10 highest grossing Western film in North America, turning its $75m budget into $183 million at the Box Office. Mel Gibson continued in his purple patch, Jodie Foster would go on to star in just as many movies in the 1990’s and James Garner’s career continued well into the next decade before the veteran’s passing in 2014

It may not have been all about the cards, but without wishing to spoil the ending, what adventure story can ever end when the dealing is done?