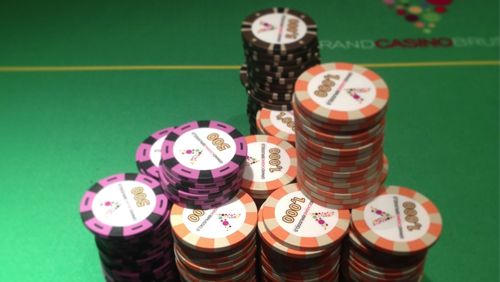 Chris Moneymaker, Justin Young and Norm Macdonald are the players. Jeff Platt is the host. PokerGO is the channel. What you’re about to watch might be the most fun quiz show you’ll see this year.

If you haven’t watched Episode 1 of The Big Blind, then you’re missing out. This review is going to have spoilers, so if you seen it yet, then sign in or sign up and check it out here.

Poker and quiz shows don’t always go to plan. Shark Tank was… interesting. PokerFace on ITV was… a minor disaster in broadcasting terms, only saved by the hosts. The Big Blind has come into territory where there is a sign planted in the ground warning those who have made it so far to think very hard about travelling further down the road they’re on.

If The Big Blind is Wile E. Coyote chasing an impossibly smart Road Runner, then it is living on the edge, trying to survive in a world designed to make it fail. Quiz shows are vastly popular. Poker is the most played card game on the planet. But the combination of the two has never seemed to work. The Big Blind might just be the show to break the mould.

The format of the game is fairly simple. There are three levels, and each level has three questions in it, each of escalating difficulty. Players can bet, raise or fold, but it’s strictly pot limit. The questions are in subjects that range from Vegas Related Music to Hand Analysis, and each player can choose to fold out of the question.

Jeff Platt is an engaging host and he corals the players into the action brilliantly, even if the weekly prizes of a fondue set and poker strategy book maybe fell a little short in the direction of the glitz and the gag itself.

The game plugs along gamely, and all three guests are right off the top shelf. Justin Young apparently replaced Amanda Negreanu, but he should have been first on the list. His barely contained glee at providing correct answer after correct answer is a joy to behold, as is the frustration that Chris Moneymaker and Norm Macdonald feel after they keep getting things wrong.

Moneymaker’s desperation to be successful is what makes his failures in certain questions so amusing. Norm Macdonald is utterly hilarious throughout and both Young and Moneymaker are clearly enjoying his brand of sit-down comedy.

With Jeff Platt comfortable in the hosts chair and the guests building to the climax of the show with plenty of gusto, it doesn’t matter that Justin Young wins at a canter. The journey to the end of the 45-minute show is plenty of fun. Both serious poker fans who might like to learn a little about the history of the game and casual viewers who like to see plenty of laughs, silly prizes and great guests battling for the win will be satisfied by The Big Blind.

We certainly enjoyed The Big Blind and would recommend that you take a look – you’ll learn something new and enjoy the company. We’re all-in on episode 1 of this brand new poker quiz show.