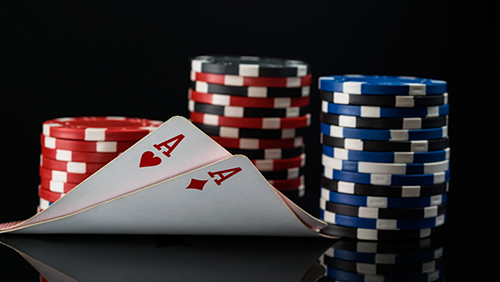 It’s hard to place the poker scene at the end of the 2006 movie Casino Royale as taking place only three years after Chris Moneymaker’s winning moment, but in terms of filming its even closer. Most of the principal photography took place one year before its release, with Daniel Craig’s character, James Bond at the centre of a movie that features poker heavily.

Poker in the movies is always tricky territory, but, as we discovered last week when we looked at the perfect opening scene in the 1998 movie Rounders, it can be done.

So, could Casino Royale live up to the standard of Matt Damon, John Malkovich and, perhaps more importantly, Brian Koppleman? In a word, no.

The scene in the James Bond movie in question is the pivotal final no limit hold’em showdown where Bond, who has already been forced to buy back into the $5m-entry sit ‘n’ go for a second bullet, avoids inglorious defeat for a second time when he makes a frankly ridiculous straight flush.

Researched by filmmakers utilising the poker knowledge of one Dr. Tom Sambrook, who presumably specialises in operations on the funny bone, the scene is, without doubt, the least realistic poker scene in any movie, ever.

Now, artistic licence being what it is, there’s no reason why a player couldn’t win the hand, or even the tournament by having a straight flush. It’s like Sylvester Stallone’s penalty save in Escape to Victory. It’s wholly unbelievable, but you love to see it so much that you’ll buy into it for the purposes of the movie’s denouement.

There are, however, several reasons why James Bond’s winning straight flush is completely nonsensical. Here are just a few of them.

1. The final hand is four-handed. This has almost never happened in tournament poker, let alone tournament poker where each player has bought in for the cost of a small country.
2. The action is all left until after the river. Two men have flushes, another has a full house and the last (Bond) has a straight flush, yet the action to the turn is as if no-one has better than ace-high and a dream.
3. The action on the river is insane. When the first man goes all-in with a flush, the second player also shoves, this time after barely thinking about the hand. No-one has even the tiniest shred of ICM awareness.
4. The average stack is around 8 big blinds. They’re moving plaques around like they’re shovelling in 200 big blinds each, yet they are all essentially nit-boxes who have left their ‘big move’ until precisely three micro-orbits before they’re all in blind anyway.

Having sat there smugly with a straight flush, watching two flushes go all-in then his mortal nemesis Le Chiffre push over the top, Bond – quite against the gentleman we’re supposed to believe he is – draws out the most astonishing slowroll in the history of poker. Ice ages come and go between him flipping over his cards.

Once the cards are on their backs, there are a few gasps from the crowd, but no-one – literally no-one – reacts how anyone on the real-life rail would. Maybe everyone related to the drama is a little too cool for school, fine. But if you were five or six martinis deep at the bar watching that play out, you’d be howling with either laughter or disbelief, or both.

To add insult to injury, the dealer replaces the community cards with each declared hand as the players turn them over, leaving many audience members wondering whether a game of patience was being played instead.

Perhaps, for the audience, it was.

Intrigued? You can watch it in all its glory here… if you dare.