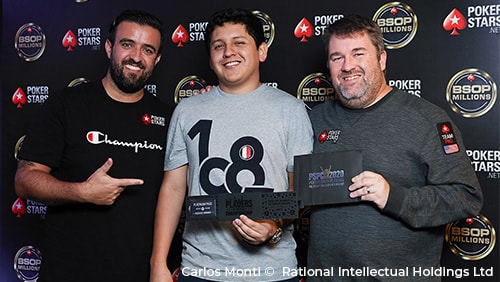 A record field of 4,142 entries in the Brazilian Series of Poker Millions event saw Peruvian player Sebastian Gaviño win a PokerStars Platinum Pass as he took down the event, beating home country favourite Gabriel Finetto heads-up after a deal.

With the gargantuan turn-out guaranteeing Brazilian and South American poker’s biggest-ever field, the prizes on the line for the winner were made so much bigger by the weight of the additional Platinum Pass on the line.

Sebastian Gaviño won approximately $31,757 by getting the better of Finetto, but the Platinum Pass was worth an additional $30,000, almost doubling the Peruvian’s winnings. As well as his €22,500 entry into the much talked about event in Barcelona, Gaviño  has also locked up  a six night stay for him and a guest as well as those all-important airport transfers, €1,250 expenses thrown in to boot.

If there was one hand that defined the Peruvian’s path to Barcelona, then it was the one he ended up dragging in five-handed. Dealt pocket aces, Gaviño was all-in along two other players and won the pot to end the hand with 75% of the chips in play. With two players left, Gaviño and Finetto did a deal, but he used his chip lead to grind down the home favourite and progress to Barcelona, meeting Andre Akkari who handed him the title along with Chris Moneymaker.

Afterwards, Gaviño told the PokerStars team about his success and how they had made his dream come true.

“I really wanted to win the Platinum Pass to the PokerStars Players Championship in Barcelona, and thank God, my dream came true. This victory is the best thing that has happened in my life.”

Joining six other winners in Barcelona, Gaviño will – just like them – fancy his chances. The PSPC has so far seen some lesser experienced players progress to the final event, which is already building up to have even more of an amateur quotient than it did last year.

This can only be a good thing. Having the potential to award a couple of players a fairy tale victory is one thing, but if things progress as they have so far, it might be a case of dozens of lucky golden ticket holders clutching their entry to the poker equivalent of Willy Wonka’s chocolate factory in 2020.

The next stop on the PSPC tour is back in Chris Moneymaker’s hands, as he travels to Florida on the 15th December to crown his final Road to PSPC prize-winner. With the now-abandoned Stones Gambling Hall leg in January no longer taking place, we’ll have another golden ticket winner to report before Christmas, and a New Year where plenty of amateur and recreational players have a very particular dream on their wish list.