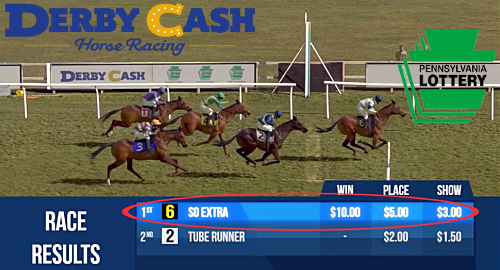 The Pennsylvania Lottery has launched a new virtual race betting product, even if the original virtual sports games have yet to make a major splash with local players.

On Tuesday, the Pennsylvania Lottery launched Derby Cash Horse Racing, a new virtual betting product developed by Inspired Entertainment. The virtual races, the results of which are determined by a random computerized draw, run every five minutes and can be observed at around 2k Lottery retailers, including bars and restaurants, with a top prize of $800k for a $1 stake.

Lottery exec director Drew Svitko said Derby Cash would give players “the experience of having a front-row seat for the racing action,” apparently unaware that racing is nowhere near the draw it once was. But Svitko maintains that racing-themed games “are popular among lottery players in other states,” so what do we know?

Derby Cash follows on last year’s launch of Xpress Sports, which offered virtual football and car racing action. But Xpress Sports has so far seriously underwhelmed Pennsylvania punters, generating revenue of only $1m to date, a far cry from the $13m the Lottery expected the product would bring in.

The slots-like games offered by Pennsylvania’s online lottery have proven far more successful following their mid-2018 launch, generating sales of $381m and profits of $31.3m in their first year of operation, despite protests by the state’s casino operators that the Lottery was horning in on their gaming turf.

The iLottery got some more good PR this month when it announced the awarding of its largest online prize to date, a $300k payday collected by a customer via the Cash Buster Extreme game. It’s a far cry from the $1m prizes that have been doled out by Michigan’s online lottery, but it’s a start.

It remains to be seen whether the iLottery’s popularity will survive the state’s recent launch of actual online casino play. There are currently only a handful of locally licensed online gambling sites, but their October revenue was one-fifth higher than it was in September, and that pace will likely accelerate as more operators and more products come online.