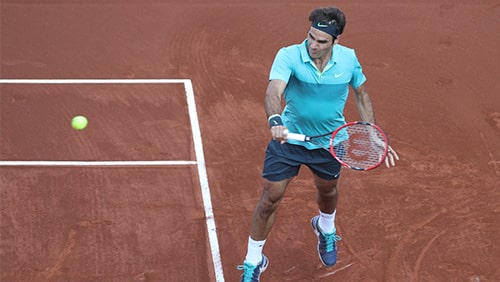 An intriguing pair of opening matches in the 2019 ATP Finals at the O2 in London saw world number one Novak Djokovic and Roger Federer both get off to the perfect start in their attempt to be champion.

With so much on the line, including a potential $2.8 million to the undefeated winner of the event, much has been made of the seeding, with Djokovic and Rafael Nadal separated in the Group draw, the two groups being titled after tennis legends Bjorn Bjorg and Andre Agassi.

While Nadal will have to wait to prove his doubters wrong by showing on the court how he is over his injury worries, Djokovic wasted no time at all laying down a marker for his Spanish rival to take note of.

Djokovic, who will overtake at the top of the Men’s Singles rankings by year end if Nadal were to fall short while the Serb reaches the final, was is no mood to wait around. He surged home 6-2, 6-1 against a shell-shocked Matteo Berrettini.

Djokovic led from the front, establishing the centre of his court like a spider controls his web, and Berrettini was unable to make any in-roads on the Serb’s serve. By contrast, Djokovic pressed back the Italian with a series of deep, probing returns that made life on court uncomfortable for the man many had tipped to cause both Djokovic and Federer problems in the group.

Djokovic, knowing that only a run all the way to the final will give him a chance of making world number one by the end of 2019, was in no mood to drop games, and Berrenttini felt the full force of the Serbian slugger’s powerful groundstrokes, each one arriving like a fresh missile to be deflected with urgency.

While Djokovic got off to a convincing start in the ATP Finals, where he will battle for his sixth win, and fifth in London – a record that would equal Roger Federer’s – the Swiss master looks like time might be catching on him quicker than a second hand gains of the minute hand.

Unable to get off to a winning start at last year’s ATP Finals, Federer repeated that unwanted statistic in his 7-5, 7-5 defeat to Austrian Dominic Thiem. The impressive Thiem, who has a 3-0 record against Federer in this year alone and a 5-2 overall winning record against the man many think is the greatest tennis player of all time, was one the attack from the off. While he himself was broken in the first set, he capitalised on an early lapse from the Swiss Grand Slam leader and took the first set 7-5.

While Federer again threatened in the second set, Thiem always looked a menace, especially when pushing Federer into the corners, and in the 11th game of the set, Thiem broke him again, this time decisively so.

With the $2.8m first place prize on offer for anyone who can go through the tournament undefeated, only Djokovic and Thiem can shoot for that glory later in the week. For Federer, his match against Berrettini will be an opportunity to gain a priceless victory, but his match against Djokovic now takes on pivotal significance. Whoever wins that battle could yet define not just the direction of the ATP Finals, but perhaps who the dominant force of tennis will be for the ensuing 2020 season.

You can watch highlights from both of the opening ties in Group Bjorn Borg right here: