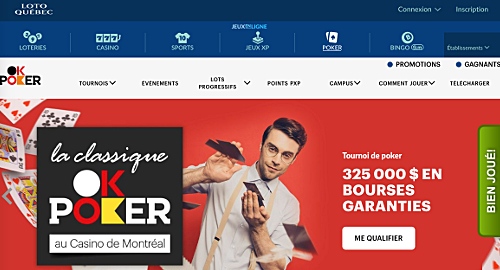 Quebec’s provincially-run online gambling site was once again the top growth vertical in the first half of the Crown corporation’s fiscal year.

On Friday, the Loto-Quebec gambling monopoly reported overall revenue of C$1.415b (US$1.08b) in the six months ending September 30, 10% higher than the same period last year. Net income rose 17.6% to C$736m thanks to the government-controlled business taking tighter control over its costs.

Before we go any further, you need to know that Loto-Quebec imposed a new accounting system as of April 1, and so all comparative figures from previous reports have been adjusted so that les pommes can be compared to les pommes, n’est-ce pas? D’accord.

Espacejeux’s online revenue continues to dramatically outperform the PlayOLG site across the border in Ontario, which brought in only C$92m in its most recent fiscal year. But Espacejeux still has a ways to go to catch up to British Columbia’s PlayNow site, which generated nearly C$150m in its most recent annual report.

Espacejeux recently introduced virtual sports courtesy of a deal with Inspired Entertainment and released an upgraded poker product (OK Poker) in the hopes of boosting its extremely modest liquidity (as of mid-afternoon Friday, around 151 players). Quel dommage.

Loto-Quebec also recently launched a new site, Lejeudoitresterunejeu.com (A Game Should Remain A Game), which aims to educate Quebecers on how to gamble responsibly. The tips are accompanied by some videos (en français) that try to draw humorous parallels with knowing when to say when.