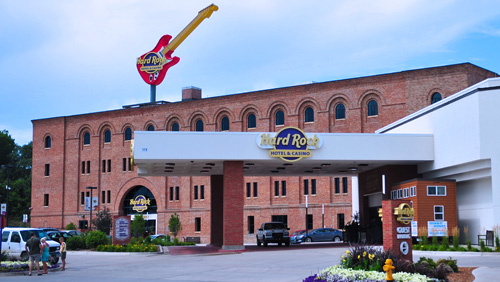 Hard Rock International (HRI) continues to take its gambling operations larger with the inclusion of sports wagers. This has already been established in New Jersey, which is seeing sports bets become a main component of the state’s gambling industry revenue. HRI has set its sights on a national expansion as sports gambling continues to gain traction, and the Florida-based company is now operational in Iowa following the launch of a retail sportsbook there September 20. The new operations are made possible thanks to a partnership with Global Innovation Group (GiG).

The Iowa Hard Rock Sioux City launched its sportsbook on September 20 in the afternoon. The casino dedicated around 400 square feet of floor space for the operations, which offer four betting windows. Based on response, online and mobile gambling could be introduced before the end of the year.

The venue opened the doors to its sportsbook about a month after the inaugural bet was taken in the state. In less than three weeks of legalized sports gambling – 17 days – sportsbook in Iowa handled $8.57 million in wagers. That handle produced $2.16 million in revenue and September’s action will almost certainly be even higher.

GiG is a gaming and sports gambling technology company that has already acquired a large global footprint. It partnered with HRI last year for physical and online sportsbooks at the Hard Rock Hotel & Casino Atlantic City and that deal also allows it access to other HRI properties across the country. The marriage for sports gambling operations gives GiG access to scale both its business and its network. However, it doesn’t expect a huge immediate boost from the new sportsbook in Iowa, with the bulk of any revenue increase coming after the launch of mobile gambling.

The company’s CEO, Richard Brown, states that the expansion into Iowa further cements the relationship between the two entities and that this relationship is “both a testament to our know-how and prowess to lead a land-based casino into the digital world of betting, and a strong validation of GiG’s commercial and product delivery capabilities.”

Iowa allows retail sportsbooks to be run at the state’s 19 casinos, with oversight provided by the Iowa Racing and Gaming Commission. In addition, those facilities can also offer online and mobile sportsbooks if they want, and it is apparent that they do. Eight casinos began accepting sports wagers as soon as the ink dried on the gambling bill and more have followed. The industry is expected to explode after next year when the state lifts a requirement that all gamblers register in person if they want to place sports bets on an online platform.