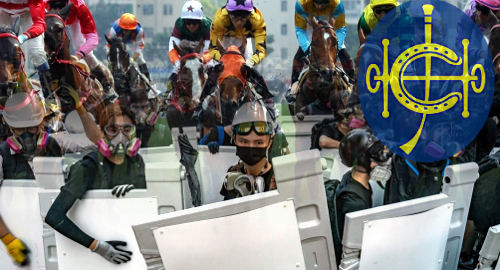 The Hong Kong Jockey Club (HKJC) has been forced to cancel a day’s worth of races over fears that protesters would disrupt the action, the latest hiccup in what has been a rocky start to the new racing season.

On Wednesday, the HKJC scrapped the entire schedule at its Happy Valley track after protesters threatened to disrupt a race featuring Hong Kong Bet, a horse partly owned by Junius Ho Kwan-yiu, a pro-China lawmaker. The Class Two Cheung Hong Handicap was supposed to kick off Wednesday’s meeting but all eight races were cancelled “in order to preserve the security and safety of people and horses.”

In July, Ho made headlines after video emerged of him publicly congratulating the white-shirted thugs who attacked Hong Kong’s black-clad protesters during one of the pro-autonomy demonstrations that have rocked the special administrative region of China this summer.

The HKJC was in a no-win situation here, as Ho reportedly refused requests to withdraw his nag from Wednesday’s race. The HKJC couldn’t risk forcing Ho’s hand without appearing to be siding with the protestors, which would have undoubtedly irked Beijing as much as Ho. Fears have now shifted to the possibility that protesters will similarly threaten to disrupt the Chinese National Day meeting on October 1.

The HKJC’s new season had already gotten off on the wrong foot after Hong Kong CEO Carrie Lam opted to skip the September 1 kickoff, the first time in eight years she’d missed striking the official gong at the season opener and the first time since 1997 that the local government hasn’t had some representation at the HKJC’s opening day.

There was also the distraction stemming from Australian casino operator Crown Resorts’ Betfair brand’s August announcement that it would offer exchange betting on HKJC races. The HKJC responded by issuing a ‘cease & desist’ letter, saying it was “cavalier” and “unconscionable” for Betfair to be taking action on HKJC races without the HKJC’s permission (and some form of financial compensation).