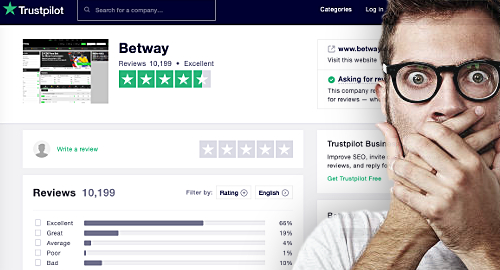 On Wednesday, UK media outlet The Times reported that Betway has been offering its customers a £5 free bet in exchange for writing a review of the company on Trustpilot, the UK’s largest consumer review website.

The Times noted that Betway had a mere eight five-star reviews on Trustpilot as of June 2016, but that number has since skyrocketed to 565 following Betway’s launch of its ‘free bets for reviews’ initiative in 2017. Some of these five-star reviews are accompanied by nonsensical text, including one memorable review that states “Good morning gofofofokfof.” (Guess ‘covfefe’ was already taken.)

The usual anti-gambling suspects, including Labour deputy leader Tom Watson, have already pulled their pitchforks and torches from the front closet. Watson told The Times that “incentivizing customers through sham bonuses is bad enough, but when coupled with encouraging false reviews, all credibility is lost.”

Betway issued a statement copping to having offered incentives to customers in exchange for Trustpilot reviews, but insisted that these incentives “are offered for both positive and negative reviews.” The company also insisted that “it is Trustpilot’s responsibility to monitor and remove fake reviews, or those which don’t make sense.”

Trustpilot said it had looked into the matter and found “no evidence to suggest that Betway is using incentives to request only positive reviews,” adding that Betway’s “invitation templates currently fall in line with our guidelines.”

Trustpilot’s UK site has a number of variants for Betway, and the main Betway.com page notes that “this company regularly asks their customers for reviews – whether good or bad.” A different page for the ‘Betway Group’ has only 29 reviews, of which 62% rate the company as ‘bad.’ That page notes that Betway “might not know this profile exists.”

Last year, BBC 5 Live Investigates was able to purchase false, five-star recommendations for reporter Dan Box on Trustpilot through a third-party service. The review that went up on Trustpilot was word-for-word as requested by the Beeb team. In response, Trustpilot said it had a “zero-tolerance policy towards any misuse” and that it had “specialist software” to “automatically identify and remove fakes.”