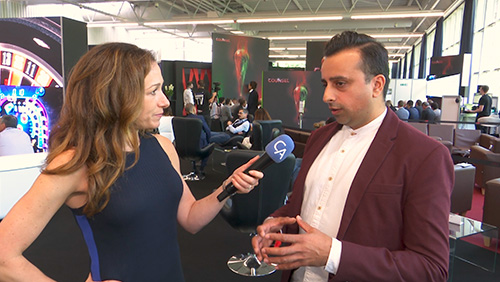 The gambling industry is increasingly starting to understand that the future is in blockchain technology and digital currencies, and there’s no better option for either of those things than Bitcoin SV (BSV). To expedite the migration to this future, nChain has been working on technology specifically suited to the industry’s needs, and Simit Naik, Director of Business Services for the company, joined our Becky Liggero to explain what that work entails.

To begin with, it’s important to understand just why BSV is so far superior to other cryptocurrency options. “Bitcoin SV is probably the only blockchain that can scale to demands of online gaming, but the capabilities of Bitcoin SV are way more… the fact that we can embed data along with the transaction data itself means that there’s new opportunities for gaming operators,” Naik told Liggero. “You can start to blur the line between physical gaming and digital gaming. The concept of an open blockchain allows you to then think about open, global payment networks. You can then blur the line between what you do in a casino against what you do in a digital casino, and then you can start having funds that are available to use both in digital and online and physical.”

As blockchain experts have said in the past, one of the true powers of developing gambling tech on the blockchain is in how much easier it makes it to work with regulators. “The fact that Bitcoin SV is working with regulators, we want to be able to get to a point where transactions that are seen as valid have KYC (Know your Customer) and AML (anti-money laundering) even at the individual wallet level,” Naik noted. “Those funds should then be able to be used in any part of the ecosystem, and so the whole concept of auditability and transparency allows us to track transactions through the ecosystem.”

But getting back to the fun part, BSV has the speed and cost effectiveness to be incredibly attractive to consumers as well. “So we can significantly improve the user experience,” he offered. “And user experience comes down to adoption, how easy it is to use, and also, from a social perspective and psychology perspective, how closely it resembles things that they do now.”

nChain’s role in BSV’s growth as a gambling option is in growing the technology and forging the relationships necessary to build adoption. “Researching new tools, techniques and methods that we can apply on Bitcoin SV,” offered, as just some of the things nChain is doing. “So within gaming, a big part of our focus is on provably fair gaming. Now the further we evolve in this ecosystem, provably fair gaming is going to become more important, especially when you think about responsible gaming. And the fact that nChain is at the forefront of the research into how we can do this onchain, you’re reducing the need for people to develop offchain solutions or services that need to sit outside of the gaming operator.”

Just having the technology is not enough though, so nChain is also talking to the right people to make BSV the first choice going forward. “So we started to speak to a lot of regulators in and around Europe, so we started to engage the FCA to understand what their main concerns are for blockchain, and also for cryptocurrency,” Naik told Liggero. “Now, we’ve had those conversations with Abu Dhabi Global Markets because they’re one of the most advanced in the way that they think about crypto and blockchain.”

What should be attractive to regulators is the immutable trail of evidence that BSV can provide. “Everything comes down to two things,” Naik began to explain. “It’s source of funds, can you verify where funds come from? Have they come from an illegal wallet or have they been used in illegal transactions? And so that’s one of their key concerns. The other one is, well, once you have illegal transactions or content, how do you stop access to that, or how do you regulate that? So those are questions that we’re working through at the moment. But then everything we do is from a regulatory perspective. So even the token protocol that we’ve developed that sits on top of Bitcoin SV is being built with regulation in mind.”