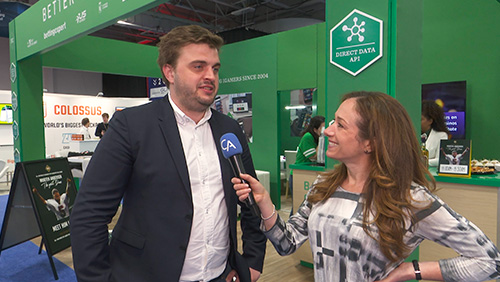 With the U.S. market slowly opening up to a myriad of gambling opportunities, countless international firms are slowly working their way into the market. Better Collective, a leading online gambling affiliate, is looking to do just that, and Marc Pedersen, their VP of Business Development & Sales, joined CalvinAyre.com’s Becky Liggero to talk about their effort to do so at the recent Betting on Sports America conference.

The first topic of conversation was the conference itself, and Better Collective’s guest, NFL Hall-of-Famer Morten Andersen. “Well, Morton is a new acquaintance for us, but obviously, us coming out of Denmark, he’s been a celeb for us for many years,” Pedersen said. “So he’s been a good example of a Dane making it over here. Throughout his twenty-five years in the NFL, I think he’s proving that it’s doable to succeed in the U.S. coming out of Denmark. And he has, what we really believe, is integrity, hard work and real dedication to what he believes in.”

Better Collective’s presence at the conference had a lot to do about recent changed in the American market, and they hope to build a presence. “U.S. basically was a small market for us until the PASPA situation last year” he noted. “After that came as a big surprise for most people I guess, but after that it’s been a growing focus for us. Until now, we’ve been running most things out of Europe, but we’re opening an office here out of New York. We will have roots on ground, and going to invest quite heavily in the U.S.”

With a big investment, Pedersen’s operation hopes to have big rules. “We believe we could be a market leader in the U.S. market and become the most important affiliate over here,” he noted. “So we need to work hard, and need to keep our integrity, but we believe we could make it.”

Unfortunately though, the Danish operation is slowly learning that America doesn’t make changes quickly. Liggero asked him which states they are seeing the most movement in. “Most movement, I would say, it’s actually the lack of movement that we’ve seen so far,” he replied. “Because as everybody knows, the regulation hasn’t been going as fast as we wanted. We expected Pennsylvania to open up sooner, hoping that New York would happen in the near future. So that’s probably where we’re getting a bit impatient, but at least, waiting for the regulation to happen in the way we want it to.”