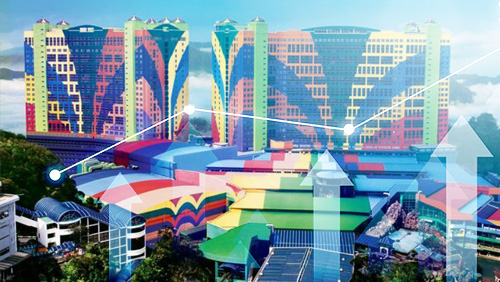 Genting Malaysia Bhd distributed some news this week, some of it good and some of it not so good. Net profit during the second quarter of the year increased compared to the same period last year, which is always welcome by companies and shareholders. The long-anticipated theme park at Resorts World Genting most likely won’t be ready on time, delayed by several months.

Genting Malaysia’s net profit for the second quarter increased year-on-year by 5.3%. This was a result of a 7.4% increase in revenue during the same period, which also helped the company’s EBITDA (earnings before interest, taxes, depreciation and amortization), see an uptick, as well. Profit for the quarter was right at $98.7 million and revenue was a little more than $616.55 million.

The news is good for shareholders, as they’ll receive a little extra bonus. The company’s board has announced that it will give a single-tier dividend of $0.014 per ordinary share, which is expected to be paid on October 11.

Genting Malaysia has operations in its home country, as well as in the U.S., the Bahamas, the U.K. and Egypt. Its Resorts World Genting (RWG) property in Malaysia is just outside Kuala Lumpur, and its domestic leisure and hospitality business, which controls RWG, reported revenue growth of 10% for the quarter. It produced $417.5 million during the period, while EBITDA remained virtually unchanged.

The company said in a filing with Bursa Malaysia yesterday, “In the period, Resorts World Genting reported overall decline in volume of business in the gaming segment, primarily due to lower incentives offered to customers in line with the group’s cost rationalisation initiatives. However, the group’s earnings were aided by improved hold percentage in the mid to premium players segment.”

The theme park being built at RWG was expected to be open sometime early next year. Those plans were temporarily put on hold due to a major breakdown between Genting Malaysia and the theme park’s partners, Fox and Disney, but when Genting and Fox kissed and made up in July, progress continued. With the drama behind it, RWG is ready to push forward and expects the theme park, which will still use Fox intellectual property rights, should be ready during the third quarter of next year.