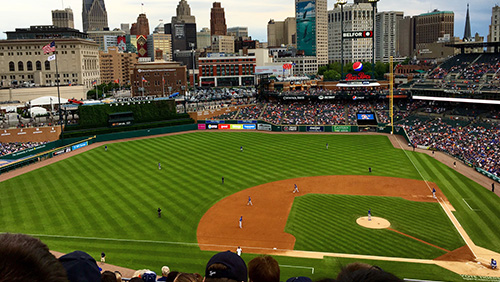 MLB set a record Wednesday night. More specifically, the Detroit Tigers set a record. The baseball team was not favored when it was heading into a game against the Houston Astros, but pulled off a surprising upset that has certain sports gambling fans leading a non-stop celebration that will most likely continue for the rest of the season. The Tigers’ victory was the largest single-game betting upset for MLB in the past 15 years.

Sportsbooks had the Astros at -500 favorites as the players were starting their warmup routines. With a $500 bet earning just $100, a wager on the Astros wouldn’t have yielded any significant return. However, the Tigers were listed at +435 – $435 for every $100 wagered. Given that the Tigers are 38-86 on the season, the odds seemed to be safe for the sportsbooks. Especially considering that the Astros are 81-47 on the season.

Astros pitcher Justin Verlander was certain to put on a good show for his team and give it yet another victory. The Tigers, though, found their baseball mojo and surprised everyone. Verlander played the entire game and showed why he’s a superstar, allowing only two hits across nine innings. However, those two connected for solid homeruns to give the Tigers the lead.

Despite the upset victory, sportsbooks weren’t feeling much of a sting. It seems that not many bettors took a chance, with all major Vegas sportsbooks indicating most of the action was on the Astros – 60% of the tickets and 70% of the money was put on the Texas team to win.

MGM Resorts International for example, reports that its sports gambling operations sportsbook took a $55,000 bet on an Astros victory. It then accepted another one for $62,350. The company states that it earned more than six figures on the game. That might help CEO Jim Murren fulfill his “MGM 2020” plan as he seeks to increase earnings.

The two teams faced off again last night and the Astros were still the favorites to win at about the same odds as the night before. The Tigers weren’t as lucky this time, though, as they ultimately fell 6-3. Anyone who took a chance on the Tigers pulling off another upset victory was left empty-handed.

MLB finally ready to hit the field, Opening Day about a month away
Erik Gibbs
24 June 2020