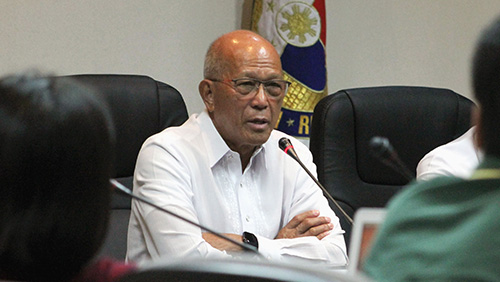 The difficult relationship between the Philippines and the People’s Republic of China impacts the former in several different ways. Territorial waters come into question, international trade deals get more speculation, and now recently, Philippine Offshore Gaming Operators (POGOs) become the target of an entirely new accusation: of being safe havens for spies.

CNN Philippines reports Defense Secretary Delfin Lorenzana is worried that POGOs could shift their focus from offering licensed online gambling operations to espionage. “It’s very easy for these people to… shift their activities to spying, [if anyone is spying.] So [it’s just fast,]” Lorenzana is reported as saying on August 16.

This concern was raised in response to lawmakers concerns that POGOs are physically situated near military and government facilities.

To step away from the story for a moment, even that revelation is laughable. Anyone who lives or works in Metro Manila lives near a military or government facility. The area is littered with them. The only way not to live near one is to re-locate into rural areas.

As a solution to this fear, the Philippine Amusement and Gaming Corporation (PAGCOR) has proposed “self-contained” POGO hubs to keep the Chinese away from Filipinos. In effect, the regulator thinks by concentrating the Chinese employees of law-abiding POGO operations into strictly regulated areas, camps if you will, there will be less reason to fear social disturbances or potential espionage. Sounds oddly familiar.

China has understandably criticized this idea as a potential infringement of their citizens rights. They’ve also fired back that their citizens are being illegally recruited by the POGOs, and they’ve pushed for the Philippines to crack down on the operators, rather than the Chinese nationals employed by them.

While Duterte has been critical of gambling in the past, this is an issue that Vice President Lenni Robredo thinks he might be too soft on. Always the critic of the country’s top boss, Robredo said:

“Why are we harboring what is illegal for them? If our friendship is very close, before we let ourselves be swarmed here, shouldn’t representatives from both countries talk first? Why would they talk about it only now when there’s so many of them already here?”

As tensions continue to heat up between the two countries, it doesn’t look like anyone is defending the regulated POGO industry. As the leaders of each country meet later this month, its possible that even more harsh talk is on the way.