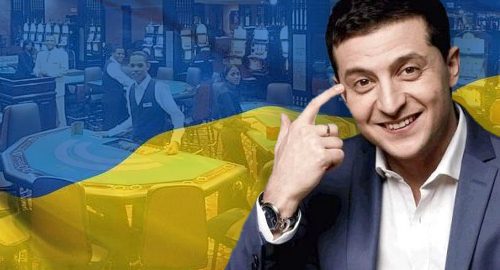 On Thursday, RBC Ukraine reported that President Vladimir Zelensky had announced plans to legalize gambling. Specifically, Zelensky plans to authorize development of “casinos in five-star hotels, which will stimulate development of the tourism cluster” in the south of the country near the Black Sea.

That ‘cluster’ presumably refers to the area in and around Odessa, which used to be known as the ‘Red Riviera’ during the Soviet Union’s heyday. Odessa used to attract a steady stream of tourists from Russia, although that was before the current conflict in the eastern part of Ukraine and the push is now on to rebuild the local tourism business.

Zelensky (pictured), a former comedian who was inaugurated as president in May, made his remarks at a business forum in Turkey, which lies just across the Black Sea from Ukraine. Zelensky said Ukrainian companies “want to grow together, so we want to see our partners in Turkey’s business.”

It’s unclear if Zelensky was advocating for Ukrainian-Turkish hotel-casino joint ventures, but Turkey has no casinos and that country’s president has often complained about his countrymen crossing over into neighbouring Georgia to visit its casinos, so Zelensky’s remarks must have gone over gangbusters in the presidential palace.

Also, Ukraine has been down this road before with little to show for it. After outlawing all gambling in 2009, the country approved draft legislation in 2015 that would have authorized land-based casinos, sports betting shops and online gambling sites. But these plans went nowhere, and efforts to resuscitate the legislation in 2017 also came to naught.

That’s not to say that Ukraine’s gamblers are going without. Local authorities routinely brag about disrupting unauthorized land-based and online gambling services. In June, the National Police raided five venues in the Khmelnytsky and Kiev regions that were disguised as lottery offices but offered patrons comfy chairs facing monitors connected to online casinos based outside the country.