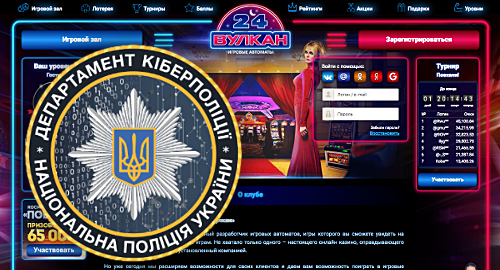 Ukrainian authorities have brought the hammer down on a group of Russian online casino sites operating without local permission.

On Tuesday, the Cyber Police of Ukraine announced that its officers, in conjunction with prosecutors in Kiev, had conducted searches of 15 locations connected to the operations of eight unauthorized online casino sites, including several domains that appear to be related to the Vulkan family of gambling sites.

The report claimed that the police raids resulted in the seizure of over 100 computers, along with mobile phones, bank cards, an American bank checkbook, foreign currency, “Russian passports of members of a criminal group,” as well as unspecified weapons and drugs.

While the investigation is ongoing, police have identified about 80 individuals connected with the sites’ operations, and the organizers are said to be Russian citizens who transferred their operations to the Ukraine in 2013 after Russian law enforcement agencies began making their life difficult.

Online gambling has been illegal in Ukraine since the country’s 2009 decision to ban pretty much all gambling activities. Recent years have seen a push to legalize various forms of gambling but little tangible progress has been made to date.

Police claim that attempts to access the eight domains from the Ukraine resulted in messages to contact’s the sites’ support services. Users then reportedly received information on how to disguise the location of their IP address in order to circumvent Ukraine’s digital watchdogs.

Vulkan is a Malta- and Curacao-licensed operation that primarily targets gamblers in the Commonwealth of Independent States. Russia’s telecom watchdog Roskomnadzor has nearly 5,000 Vulkan-related domains on its online gambling blacklist.

In March, market research firm Gfk Ukraine conducted a survey of Kiev residents’ attitudes toward gambling. Around half of respondents favored legal sports betting shops, while only 20% supported online casinos. Tellingly, given the ongoing tensions between Ukraine and Russia, only 3% of respondents favored allowing Russian gaming firms to operate in Ukraine.