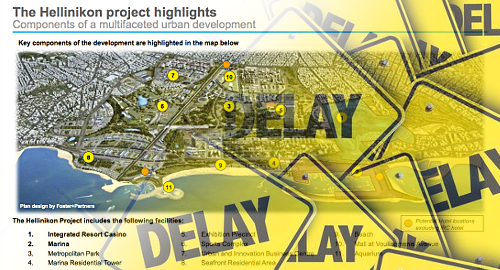 Greece’s government insists that it won’t allow any more delays in the deadline for casino operators to submit bids for the 30-year casino license at the Hellinikon integrated resort project.

Late last month, Greece’s new government pushed back the deadline for the casino tender bids for the €8b Hellinikon resort project from July 31 to September 30. The government also pledged to deliver the overdue ministerial decisions on the project’s land usage that the previous administration was accused of slow-rolling.

Local media quoted Development and Investment Minister Adonis Georgiadis saying that there must be no further delays – the last delay was the fourth – to the casino tender deadline, because “without the tender for the casino the investment at Hellinikon cannot proceed.”

Georgiadis also revealed that his department had met last Wednesday with two US tribal casino operators – Hard Rock International and Mohegan Gaming & Entertainment (MGE) – that have expressed interest in the casino tender. Of the pair, only MGE has so far submitted a formal bid, in partnership with local construction firm GEK Terna.

The names of a few other would-be applicants, including Caesars Entertainment and Malaysia’s Genting, have been bandied about in connection with the Hellinikon tender but reports surfaced this spring that Caesars was bowing out of the competition. The company was recently acquired by rival Eldorado Resorts and its focus now appears entirely preoccupied with the integration of the two firms.

Genting had reportedly submitted comments on the licensing tender, but Greek media has since claimed that Genting was also losing interest in pursuing the Hellinikon project. All three companies that submitted comments reportedly sought a reduction in the proposed rent being charged by Lamda Development, the Greek/Asian/Arab entity that is spearheading the Hellinikon project.