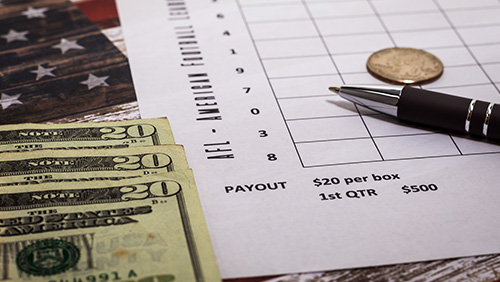 Texas has always been known as the state where everything’s bigger. Texans believe in taking things to the extreme, pushing the envelope to see how far they can ride. This is true for virtually anything in the state, including illegal sports gambling. Three members of the same Texas family have just pleaded guilty in federal court after having been busted for running one of the largest illegal operations in the state—and the country.

The three—Larry Tillery, wife Judy Kay and son Brian—managed to keep their enterprise running for 30 years without getting caught. They kept their illicit activity under wraps with the help of their business, the family-owned Daylight Motors used car dealership, to launder funds from their activity. That dealership reportedly helped process as much as $52 million in illegal bets from 2011 to 2016, according to the U.S. Department of Justice.

After the walls around the gambling operations began crumbling down, the trio was picked up and charged with a number of crimes. Appearing before a judge this past Tuesday, the 69-year-old patriarch and his son admitted to their crimes, pleading guilty to tax evasion and illegal monetary gain. 62-year-old Judy pleaded guilty to manipulating financial transactions in order to facilitate hiding the gains from tax authorities.

Those walls started to weaken in 2014 when an undercover agent involved in another illegal operation received a tip that Larry Tillery was the man to see for high-stakes gambling in Beaumont, Texas. The agent was reportedly told that he was able to take bets as high as $100,000 on sporting events, and that led to a formal investigation that included surveillance and wiretaps. In February 2017, law enforcement swooped in and arrested the husband and wife.

According to U.S. Attorney Joseph Brown, “The Tillerys ignored state and federal gambling laws and profited tremendously from a criminal enterprise. We intend to collect every bit of the money judgment that will be issued against them and we expect Larry Tillery’s prison sentence to send a message to those who profit from illegal bookmaking.”

In making a deal with prosecutors, the Tillerys will most likely still face jail time, but their sentencing will be held at a later date. Larry Tillery is looking at as many as 10 years in a federal cell, while his wife and son could receive up to five years apiece. They also have to pay a judgment of $32 million, as well as forfeit $1.7 million in cash that was confiscated during the investigation.

Chip Lewis, the family’s lawyer, said in a statement after the enterprising Tillerys appeared before the judge, “Today is the last step in Mr. Tillery’s efforts to handle his business with the IRS. The Tillery family sincerely appreciates the overwhelming love and support offered by so many good people across Southeast Texas. I have handled quite a few cases and I have never encountered a more beloved man. Mr. Tillery’s kindness and generosity has benefited countless folks in this community.”