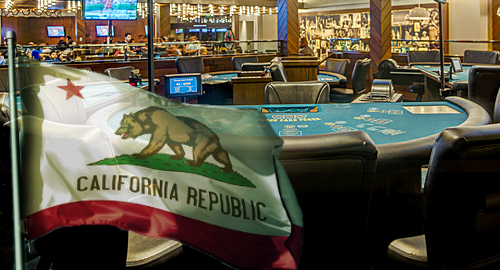 California tribal casino operators are vowing to continue their legal fight against the state for permitting private cardrooms to offer so-called ‘house-banked’ games.

This week, the US District Court for the Eastern District of California dismissed a lawsuit filed by three of the state’s gaming tribes – the Yocha Dehe Wintun Nation, the Viejas Band of Kumeyaay Indians and the Sycuan Band of the Kumeyaay Nation – who accused the state government of violating the tribes’ gaming compacts.

Specifically, the tribes argued that the state violated exclusivity provisions of the compacts by allowing commercial cardrooms to offer house-banked games, in which players play against the house (blackjack) rather than against each other (poker).

The cardrooms came up with a variation known as ‘player-banked’ games, in which the ‘house’ role is assigned to each player at the table on a rotating basis. In practice, the house role is performed by a ‘third-party proposition player,’ who is usually employed by a private company specifically for that purpose, and the rotation rule is skirted by this employee offering the role to each player in turn, who routinely decline the offer, and on goes the game.

On Tuesday, Judge John Menendez ruled that the three tribes’ gaming compacts – which were negotiated in 2015 and 2016 – don’t contain the same exclusivity clauses as compacts the state inked with other tribes in 1999. As such, Menendez said the tribes had no right to exclusivity beyond that which is contained within the state constitution.

However, the tribes believe the court was “incorrect in concluding the compacts did not provide a basis to compel the state to enforce the law.” The tribes pointed out that the state itself “does not dispute the merits of the case,” even if the state “is doing either little or nothing to stop the cardrooms’ unlawful conduct.” The tribes are considering whether to appeal the ruling to the Ninth Circuit Court of Appeals.

Kyle Kirkland, president of the California Gaming Association (which represents cardrooms), issued a statement praising the court for knocking back the tribes’ “attempt to eliminate competition.” Kirkland said cardrooms would “continue to oppose specious tribal attacks on our industry, community and employees.”

Other tribal operators have filed their own lawsuits against California’s cardroom industry, which has occasionally benefited from some truly sketchy behavior by state regulators. The cardroom industry has also been the subject of numerous federal probes involving shoddy anti-money laundering practices, illegal sports betting and other “flagrant criminal activity that occurred in plain sight.”