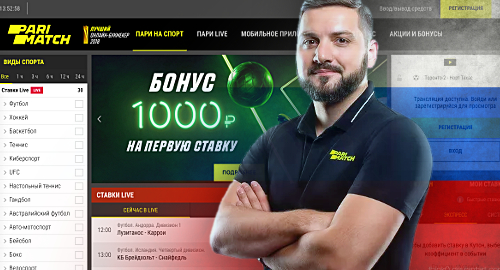 In March, Russian media reported that Digital Betting was discussing some form of partnership with Parimatch, which operates in Russia as Betring LLC. (International online gambling operations offered under the Parimatch banner are conducted via the Cyprus-based Parimatch Holding.) It’s unclear how Sergeyev’s new role impacts these discussions.

In an interview with Russian affiliate Bookmaker Ratings, Sergeyev threw a little shade at his former company, which failed to make much of a dent in Russia after two years of operation. Online traffic rankings showed Bwin.ru ranked 12th out of 16 local online betting licensees in 2018.

Sergeyev noted the financial limits imposed on Bwin.ru’s marketing efforts, saying it was “impossible” to compete with established Russian brands with the “limited funding” the site was allowed to spend. Sergeyev said Bwin.ru had done “a lot out of nothing” but the site had “traveled a difficult path.”

Rambler’s waning interest in the Bwin.ru project became patently obvious in 2018, when its Championship portal struck an exclusive bookmaker advertising contract in 2018 with Bwin.ru’s rival Fonbet, after which Bwin.ru’s traffic nosedived. That Fonbet contract was renewed a few months back, effectively sealing Bwin.ru’s fate.

At present, Russian betting operators are required to fully vet the identities of prospective customers, who are then forced to repeat this process with the online payment hubs known as TSUPIS, then finally confirm this registration at a land-based facility.

On Tuesday, Russian legislators approved the second reading of bill No. 423799-7, which will enable betting operators to conduct business with customers who have successfully undergone TSUPIS registration, without the operator having to perform its own identity checks. A date for the bill’s third reading has yet to be scheduled.