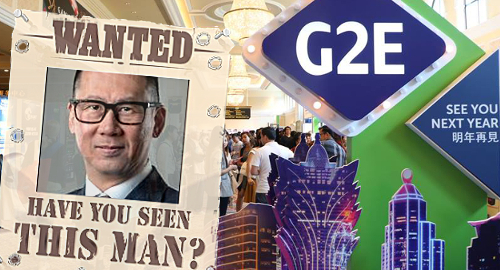 Paulo Martins Chan, director of Macau’s Gaming Inspection and Coordination Bureau (DICJ), was scheduled to give a keynote address on Day 2 of the G2E Asia shindig but pulled out at the last minute. The DICJ opted against sending a replacement speaker.

The Macau News Agency reported that Chan (pictured) had decided against speaking at the conference after receiving complaints that some exhibitors were “using the Macau exhibition to promote illegal online gaming.” The DICJ launched a “detailed investigation” into these complaints and felt “it will be more proper for the Bureau not to attend activities held by the respective exhibition organizer” until the results of this investigation were known.

Similar complaints were lodged following the 2018 conference, which prompted the DICJ to issue a statement earlier this month reminding exhibitors that online gambling was illegal in Macau and that the DICJ would make a “special effort” to ensure no one got away with promoting illegal activity.

It’s unclear if the two are directly related, but the Macau News Agency subsequently reported that Macau’s Judiciary Police arrested a 27-year-old male on Wednesday for promoting an unidentified online gaming site at the conference.

The individual, who lacks a local gaming license, allegedly hosted a booth that prominently featured Macau’s official seal and flag to promote the ‘entertainment segment’ of his company, opening him up to potential fraud charges.

G2E Asia hasn’t always been the smoothest ride for its organizer, Reed Exhibitions. In 2012, a patent dispute between Asian and Western electronic gaming machine developers blew up into a verbal donnybrook involving conference staff and some Macau officials. The highly public tiff convinced some device makers to skip the conference’s next few editions.