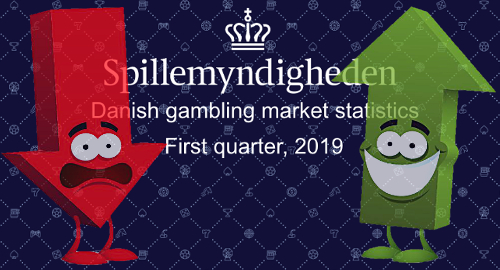 Denmark’s regulated gambling market was a clear case of online improvements and land-based declines in the first quarter of 2019.

Figures released this week by the Spillemyndigheden regulatory agency showed Danish-licensed operators generated revenue of just over DKK1.6b in the three months ending March 31, a modest 4.5% improvement over the first quarter of 2018.

Sports betting remains Denmark’s dominant gaming vertical, with revenue of DKK619m in Q1, representing 39% of the total pie. That sum wasa 10.4% higher than Q1 2018 but marks the lowest total the market has generated in four quarters.

Online casino revenue was up 6.6% year-on-year to DKK556m, which sounds good until you realize that all four quarters last year saw double-digit gains in this vertical, suggesting the market has reached a plateau. The Q1 total sum was only DKK1m higher than the market generated in Q4 2018.

Online slots claimed 62.3% of the online casino pie, followed by roulette (14.6%) and blackjack (12%). Desktop computers remain the dominant online casino medium at 56.8%, down one point year-on-year.

Revenue from gaming machines in arcades and restaurants fell 3.6% year-on-year to DKK346m, the lowest total on record. The nation’s seven land-based casinos saw their revenue slide 10.8% to DKK83m.

Denmark’s gambling self-exclusion registry contained 18,100 names at the end of March, of which 12,415 had opted for permanent exclusion. Men made up just over three-quarters of registrants.

This week also saw Spillemyndigheden announced a new whistleblower program to allow gaming industry staff to fink on their employers if they suspect violations of the country’s anti-money laundering laws. Just curious, but how does one say ‘Michael Cohen’ in Danish?