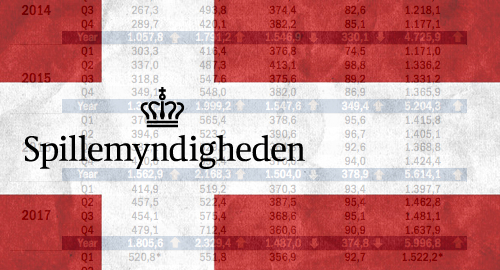 Denmark’s regulated gambling market revenue grew nearly 9% in the first quarter of 2018, largely on the strength of its online casino licensees.

Figures released Thursday by the Spillemyndigheden regulatory agency showed Danish-licensed operators generated gross gaming revenue of DKK1.52b (US$236.3m) in the first three months of 2018, up 8.9% from the same period last year but down 7% from Q417.

The dominant sports betting vertical reported revenue rising 7% year-on-year to DKK555.4m, although this figure was 22% lower than Q4, which featured a lower than usual payout ratio.

Wagering on mobile devices claimed the largest slice (49.9%) of betting revenue, followed by land-based (35.3%) and desktop (14.9%) channels. Land-based wagering accounted for nearly 52% of all individual bets but just 24% of betting turnover, while mobile accounted for just 27.2% of bets but 54% of turnover. Desktop wagering’s share of bets and turnover was roughly equal at 22%.

The online casino vertical generated revenue of DKK520.8m, up 25.5% year-on-year and 8.7% higher than in Q4. However, Spillemyndigheden changed its online casino calculations in Q1 to include online bingo, which the regulator formally approved as of January 1.

Online bingo contributed DKK15m to Q1’s online total, representing a mere 2.9% of the online casino pie. Online bingo showed a steady progression over its first three months, with stakes rising from DKK5.2m in January to DKK8.5m in March. Slots remain the dominant casino product at 66.5%, followed by roulette (13.1%) and blackjack (10.8%).

Online poker continued its freefall, reporting combined tournament and cash game revenue of just DKK27.9m in Q1, down from DKK34.9m in the same period last year and from DKK32.1m in Q417.

Land-based gaming machines in restaurants and arcades saw their revenue fall 3.6% to DKK370.3m while the country’s seven brick-and-mortar casinos were basically flat at DKK92.7m.

Denmark’s ROFUS self-exclusion gambling registry added nearly 2,000 names since the start of the year, with the total standing at 14,871 at the end of March. Of these, 10,122 had opted for permanently banning themselves from the nation’s gambling operations.