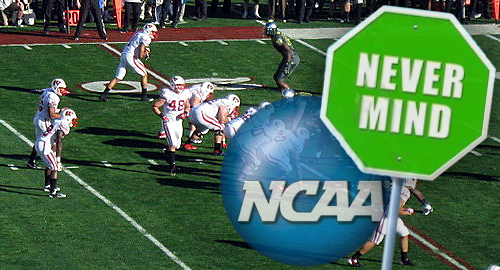 States that offer legal sports betting will no longer be prohibited from hosting college championship events, according to the body that oversees US college sports.

On Thursday, the board of directors at the National Collegiate Athletics Administration (NCAA) issued some policy changes, including the decision to rescind the NCAA Championships Policy Related to Sports Wagering, which banned any state that legalized single-game betting from hosting college championship competitions.

The NCAA’s no-championships-for-you policy dates back to 2012, when the New Jersey state government approved its initial single-game sports betting legislation. The NCAA promptly pulled five collegiate championship events from the state, leading then State Sen. Ray Lesniak to slam the NCAA’s approach as “ludicrous and hypocritical.”

The NCAA lifted its New Jersey ban the following year but continued to oppose the state’s betting legislation in court, along with the four major North American pro leagues. However, when the US Supreme Court determined in May 2018 that the leagues were on the wrong side of history, the NCAA did an abrupt about-face and began advocating for federal betting regulations.

That campaign for federal betting oversight appears to be another loser, as legal wagering was available in eight states by the end of 2018 and four more states have approved betting legislation so far this year, including Tennessee just this week.

Nonetheless, old habits die hard, and Thursday’s announcement doubled down on the NCAA’s support for federal betting standards, and the NCAA would still prefer to see college sports exempted from any federal state or betting regime. Barring that, the NCAA says any betting legislation “should protect student-athlete well-being and the integrity of games.”

As always, any sanctimonious NCAA claims to have the best interests of its ‘student-athletes’ at heart need to be taken with a pillar of salt. And the idea that game integrity is only now a major concern for the NCAA belies the fact that wagering has been going on since sports were first played.

In related news, the NCAA is reportedly mulling the imposition of a national injury report for college athletes, replacing the current voluntary system, which lacks an enforcement mechanism for not reporting or misreporting players’ status. The NCAA is touting the new system as a means of preserving the integrity of games in a legal betting environment.