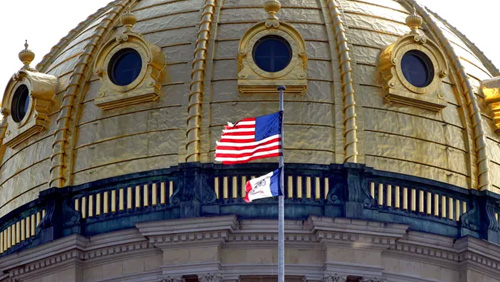 Iowa appears to be close to legalizing sports gambling. State Representative Bobby Kaufmann, the main sponsor behind a gambling bill, told Casino.org that the legislation is expected to soon be put to a vote by Iowa’s House of Representatives. The bill has already cleared a crucial House Committee vote after adding some requested changes and amendments.

If Kaufmann gets his way, the bill, currently under House File 748 (HF 748), will be put to a floor vote “no later than the middle of April.” It made it through the House Ways and Means Committee a week ago today by a vote of 16-7, an indication that it has strong bipartisan support.

As has been seen in other states, the bill would prohibit wagers on the state’s college teams, their opponents and the players for both teams. 6.75% in taxes on net receipts would be due the government, of which 25% would go to the creation of gambling treatment programs by the Iowa Department of Public Health. Mobile gambling would be allowed to be offered by casinos, but any gambler accounts created prior to January 1, 2021, would have to be established in person at the casino. That move is designed to create a “level playing field” for Iowa’s 22 casinos.

While there has been substantial support for HF 748 so far, this could change quickly. New amendments are expected to be filed over the next couple of weeks that could alter the bill’s form, and one lawmaker who said yes during the committee vote now says she might say no in the floor vote.

Representative Mary Wolfe penned a piece for the Clinton Herald in which she raised concerns over the low tax rate. She asserts that only Nevada, which has a much larger gaming industry, collects 6.75% and that Iowa charges casinos 22%. She has is pushing for a 3% “mobile fee” for all wagers placed on line in order to ensure that grants targeting community non-profit organizations will benefit. She explained, Note that I can completely avoid paying the (mobile convenience fee) by placing my sports bet in person at the casino, in which case I’ll probably also engage in some ‘regular’ casino gambling and maybe have a meal at a local restaurant and probably have a real good time so … that will be a win-win.”