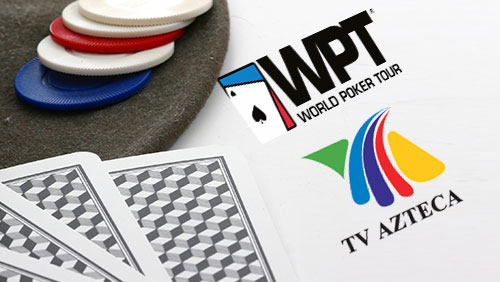 The World Poker Tour and its sister company Allied Esports are moving into the Latin American region after cutting a deal with Grupos Salinas subsidiary TV Azteca to bring poker and Esports into the area.

Donald Trump might want to build a wall between the two nations, but that hasn’t stopped Adam Pliska and the crew at the World Poker Tour (WPT) from wanting to set up camp in Mexico.

As previously reported, the WPT and its sister company Allied Esports, both owned by Ourgame International Holdings, are expected to be acquired by the Black Ridge Acquisition Group, and will operate as Allied Esports Entertainment, Inc., and what follows is an example of how you can expect the new partnership to flourish in the coming years.

The WPT and Allied Esports has signed a five-year strategic alliance with Grupa Salinas and its subsidiary TV Azteca to spread the word of poker and Esports throughout Latin America.

On the poker side of things, TV Azteca will promote the WPT brand throughout Mexico in some innovative ways. The WPT has handed TV Azteca a license to use the WPT brand in developing social poker and other gaming products in Latin America, and the first of these will be a first of its kind Spanish-language app.

The new app will showcase poker and casino with built-in education of both games. TV Azteca is also promising a unique rewards system and the addition of a world-class Spanish commentary team for coverage of the 17-seasons of content that they now access.

Grupo Salinas is also going to sell WPT-branded merchandise in their Latin American stores, and the duo will collaborate with special Spanish-language programs at TV Azteca’s state-of-the-art studio located in Mexico City.

TV Azteca is the premier sports network in Mexico controlling more than 40 local broadcasts and regional free-to-air stations. They also have cable packages with broadcast giants Netflix and HBO. The WPT and Allied Esports is about to gain access to over 95% of the Mexican market.

As part of the deal, TV Azteca will help create and broadcast two WPT Main Tour events, and eight WPTDeepStacks and WPT500 events each season known as the WPT LATAM Tour, with the first building blocks gaining cement within the next 12-months.

Adam Pliska called the deal a ‘historic advancement for the World Poker Tour into Latin America.’

In 2017, WPT’s owner OurGame International Holdings unveiled plans to raise close to $55 million in a bid to expand the brand in Asia and South America. The WPT has since held events in Japan and Korea, so the LATAM news seems the next logical step.