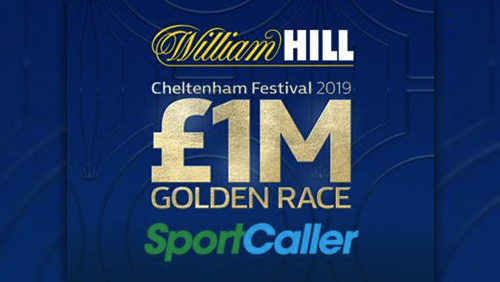 8th March, 2018 – SportCaller, the free-to-play (FTP) sports-game specialist, has extended its partnership with William Hill ahead of the Cheltenham Festival by launching a new game, Golden Race, to help engage and optimise the operator’s thriving customer base.

Golden Race is a competition which asks players to compete for a prize pot of up to £1m by predicting the finishing order of a given number of runners in the featured “Golden Race” each day at the four-day meeting horse racing spectacular.

In order to play the game, entrants must place a £10 qualifying bet (or £5 each-way) on any UK/IRE race that same day, which then entitles the player to then participate in the Golden Race for the jaw-dropping £1m, or a consolation prize of £50,000 for forecasting the first two finishers home, if the jackpot isn’t won.

This easy-to-integrate game is already proven to accelerate account acquisition and increase betting activity for thousands of William Hill customers. Indeed, after its recent roll-out, a £100,000 jackpot has already dropped on Wednesday 6th March, when one lucky player successfully predicted the first six horses home in the Golden Race at Kempton. On that race alone, another player ended up a wafer shy of greatness with the first five correct, but they still went on to share the consolation rewards with 113 others.

Unlike many improbable jackpot games, this FTP continues to demonstrate its attainable credentials with authentic, regular payouts to William Hill customers who are flocking to its engaging playability and credibility.

Golden Race has been specifically tailored by SportCaller to drive retention across all operator platforms, boosting the user experience on horse racing’s showpiece festival which traditionally exerts a huge pull on annual targets. This FTP game has been ingeniously integrated into the William Hill account architecture, accessible from a single-sign-on facility on the iPhone app and easily monitored through bet history tab.

In a largely standardised marketplace for sign-up offers and bonuses, SportCaller is unlocking another vertical for enhanced recruitment, reactivation and retention through deep engagement and organic gameplay on mass-appeal sporting events.

SportCaller MD Cillian Barry said: “Having originated the first free-to-play jackpot game with Channel 4 Racing way back in 2014, it’s great to return to our first love ahead of Cheltenham with the next generation in horse racing FTP.

“It’s a real validation for Hills, a name so intrinsically connected with horse racing and The Festival, to have enlisted our services and we can’t wait for Golden Race to come under starter’s orders next week and for one, or more, lucky punters to bag the £1m daily jackpot!”

Liam Wallwork, Commercial Director at William Hill, said: “Having successfully showcased the potential of FTP with our popular Lucky 7 racing game, we were keen to recruit SportCaller’s services again for Cheltenham, a tentpole event for us where client retention is invariably at a premium.

“SportCaller have again delivered on a refreshing new FTP which has already proved a boon for player engagement. Jackpot games have to be winnable, otherwise our clients won’t trust or play them. So, we were thrilled to see so many enjoy the Midas touch at Kempton’s Golden Race on Wednesday. The game will now be the cornerstone of our marketing and advertising campaign for The Festival and beyond. In fact, we will be running the £1m Golden Race in tandem across the meeting alongside Lucky 7 for 100k-a-day. It’s by far the most generous FTP offering in the village.”

About SportCaller:
SportCaller is the leading free-to-play sporting game provider, whose platform allows fans to connect and compete across a variety of sports. It provides free-to-play and jackpot games for operators and media owners, generating new accounts allied to trackable levels of increased player-activity and loyalty. SportCaller works with clients in UK, Europe, Asia, Australia, Africa and North America, ranking William Hill, GVC, Paddy Power Betfair, MoPlay and Lottoland amongst its expanding client-base.