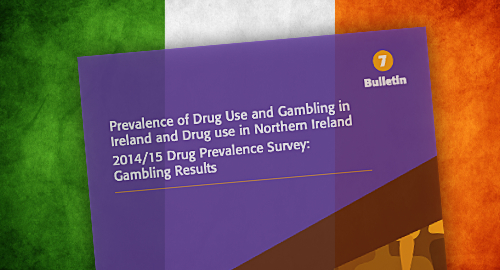 This week, Ireland’s Health Research Board released its latest gambling prevalence study, which incredibly dates all the way back to 2014-15, which we guess is in keeping with the country’s tortoise-like approach to updating its gambling laws, but still…

The survey conducted face-to-face queries of 7,005 Irish residents aged 15+ between August 2014 to August 2015. The survey’s definition of gambling included everything from lottery tickets, casinos, online gambling, betting shops, racetracks to playing bingo and card games with family or friends.

Some 64.5% of respondents admitted gambling in some form over the previous 12 months, with 41.4% doing so on a monthly basis. Lottery products led the way with 56.7% participation, followed by betting in a bookmaker’s shop (15.3%), betting at a horse or dog track (12.7%) and playing cards for money with friends or family (7.8%).

A mere 4.3% of respondents said they’d gambled online or over the phone in the previous 12 months, while another 3% reported playing online lottery games. However, of those who reported gambling on a monthly basis, online casino games scored highest (24.5%), while online/telephone sports bets ranked third (12.1%).

Naturally, Irish media outlets are focusing on the nearly one-quarter of youths aged 15-17 who gambled in some form over the previous 12 months. However, while these youths were apparently quite proficient at accessing land-based lottery products (9.7%), racetrack wagers (9.4%), OTC wagers in betting shops (5.8%) and even casino games (2.1%), only 0.9% were able to gamble online or over the telephone.

Of all respondents who spent more than €250 on gambling products in the previous 12 months, lottery products led the way with 11.2%, followed by sports wagers at betting shops (3.9%), racetrack wagers (1.8%) and online/phone wagering (1.4%).

Around 0.8% of respondents showed signs of problem gambling activity, with males (1.4%) dramatically outpacing females (0.2%). Younger respondents demonstrated greater problem gambling prevalence, with the highest rate (1.5%) coming in the 25-34 age demo, in which the gender disparity was even higher (2.9% male, 0.2% female).

The report found no fan in Sinn Féin’s Louise O’Reilly, who called the findings “flawed, dated, at variance with new evidence and anecdotal evidence and cannot be used in good faith as an accurate basis for policy information.”

Ireland’s government says it’s currently working on its next survey, which will cover 2018-19, and the initial results will be shared at some point over the next year.