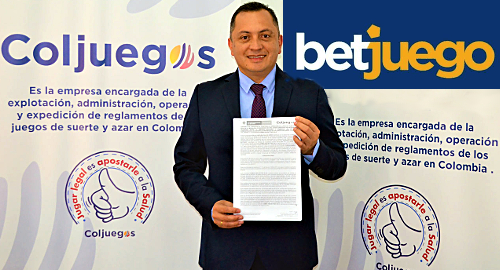 Colombia’s regulated online gambling market hit new heights in 2018 and the recent awarding of the market’s 17th online license are boosting expectations for further growth in the year ahead.

On Monday, Colombian gambling regulatory body Coljuegos announced the issuing of its 17th online gambling license to the Bogota-based Games and Betting S.A.S., which plans to offer sports betting and casino products from its Betjuego.co domain (which has yet to officially launch) for the duration of its three-year permit.

Colombia issued its first online gambling license in July 2017, after the country became the first South American jurisdiction to approve online gambling legislation the previous October. Of the 17 current online licensees, 10 received their official permits in 2018.

Coljuegos president Juan B. Pérez Hidalgo recently celebrated the regulated market’s growth over its first 19 months of existence. The official figures for 2018 show the regulator’s take from online taxes and fees hitting COP37.9b (US$12.26m) in 2018, more than seven times the COP5.3b Coljuegos collected in the second half of 2017. The sum represents 6.6% of Coljuegos’ total collection from gambling rights last year.

There were 1.9m accounts registered with Colombian-licensed online operators at the end of 2018, a number that Coljuegos says has since grown to over 2m as of January 31, 2019.

In collaboration with the Ministry of Information Technologies, the Police Cybernetic Center and local internet service providers, Coljuegos said it had blocked 2,624 domains of internationally licensed online operators serving Colombian customers without a local permit.

Pérez Hidalgo reminded these international rapscallions that they face prison sentences of up to eight years, assuming these foreigners are willing to travel to Colombia and allow local authorities the opportunity to clap them in irons. Recognizing the unlikelihood of such an occurrence, Pérez Hidalgo instead pleaded with local gamblers to do the patriotic thing and patronize the 17 locally licensed operators.