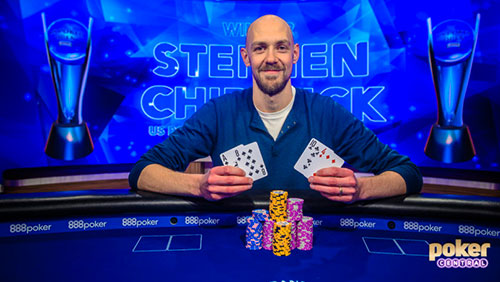 Stephen Chidwick has retaken the lead from Sean Winter in the US Poker Open after beating Cary Katz, heads-up, in Event #6: $25,000 Pot-Limit Omaha.

Professional poker players don’t have much faith in the stock of their peers. Ask a pro if another pro is a good pro and that pro will often say, “Nah, he’s a fish.”

Stephen Chidwick is not one of those pros.

Whenever you ask a high stakes poker player to name one of the best in the business, the man from Deal in the South of England is often the first name to fall from their lips, and for a good reason.

With six of the planned ten US Poker Open events in the books, Chidwick is on course to defend the title he won in 2018 after taking down his second event of the series, beating 39-entrants in the $25,000 Pot-Limit Omaha (PLO).

Here’s how he did it.

Tom Marchese doubled through Anthony Zinno when AhAdQd6s beat AsJs4d3c all-in pre-flop. Sean Rafael doubled through Ben Lamb when he moved all-in chasing a flopped flush draw and got there on the river. And then Cary Katz doubled through Chidwick when his KsKcTh8s beat QcJc9c9d when all-in pre.

Then we lost Sean Rafael in the fifth spot after he went to town on a 9d6d6c flop holding AcJcJdTs, and Chidwick made the call with trip sixes. The turn and river bricked for Rafael who left with $78,000, his most significant live score to date.

The pair got it in on a flop of As8s5c with Katz holding aces and eights, and Lamb chasing a gutshot. Katz improved to a full house on the river, and Lamb was out minus the bleating.

Marchese was the aggressor, raising to 240,000 holding QcQhJs5s in the small blind after Katz had limped from the button holding KcQs6s3c. Katz called, and then the pair got it in on a Jc9c4h flop with Marchese ahead with a couple of jacks. The 2c handed Katz a flush, leaving Marchese drawing dead.

Chidwick then doubled through Katz after his QcQs5c4h rivered a flush against Katz’s JhTs5s3c. Katz moved all-in on the river holding two pair, and Chidwick made the call.

Chidwick bet pot holding Ts9h7h6s, and Katz repotted it holding AdKc8d5c. Chidwick called, and the pair were soon staring at the Ks7d2s flop. The couple got it in on the flop with Katz ahead with a pair of kings, The Qh gave Chidwick a barrowload of extra outs, and the 3s on the river was one of them handing the man from the UK a flush for a 5,140,000 v 710,000 chip lead.

The final hand saw Chidwick turn a wheel when all-in AsTc8s4h v AcJsJd3d to win a hard-fought heads-up contest to overtake Sean Winter at the top of the overall leaderboard with Katz nestled in third.

It’s the fourth final table of the series for Chidwick (tying with Sean Winter), and his 16th live tournament win. Chidwick has won three mixed game tournaments, but never a PLO event, although he did finish 10/1128 in a $1k PLO at the 2014 World Series of Poker (WSOP).

Chidwick now leads Sean Winter by 100 points in the race for the title and the extra $100,000 in cash. Serial ARIA ITM finisher, Cary Katz, sits in third after making his third final table and finishing runner-up twice after losing out to Ali Imsirovic in Event #5 $25,000 No-Limit Hold’em. He is second to Chidwick in money earned with $580,200 versus $705,950.