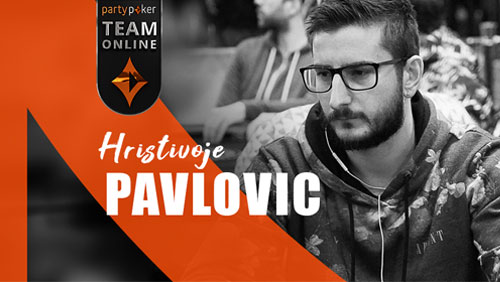 Two stories knitted together to make one, weaving the World Poker Tour partnering with BitMovio into the story of Hristivoje “ALLinPav” Pavlovic joining Team Online at partypoker.

When it comes to picking up the bugle and spewing your brand over the world, nobody does a better job than the World Poker Tour (WPT). A week after signing a deal with BT Sports to showcase Season XV to viewers in the UK & Ireland, Adam Pliska and his breathtaking broom cupboard full of brilliance are at it again.

The WPT has inked a deal with a next-generation blockchain based video entertainment system known as BitMovio. Advertising an audience chocked full of millennials and Gen Z folks, BitMovio looks like a cross between Patreon, YouTube, Twitch and Netflix.

If you have a crypto-wallet, like watching unique content, or are a content creator, and wish to charge a few cryptocurrency coins for your troubles, then this is the platform for you.

The distribution deal involves the broadcasting of WPT Season XII and XIII, and that, folks, is over 700 hours of content.

Check out the beta version of BitMovio right here.

Following on quickly from the announcement of Team Online, and the signing of Matt Staples and partypoker has added a second player to the roster.

The latest addition to the team is Hristivoje “ALLinPav” Pavlovic. The Australian native currently living in New Zealand has a cult Twitch following of more than 40,000 people who he entertains with long stretches of mid-stakes multi-table tournaments (MTTs).

“Signing with partypoker ranks as one of my proudest achievements. I’m stoked to represent a company that has strong ethics at its heart, and I can’t wait to help build the great game of poker.” Pavlovic told the community via press release.

And partypoker have only just begun.

According to the press release, there will be more announcements in the coming weeks and months. If you consider how many people they added to Team partypoker once they got rolling, you can expect the online stream team to be even bigger.