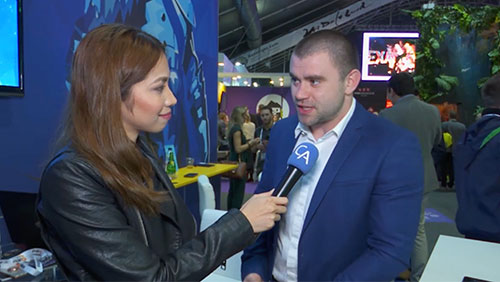 The gambling industry needs to take esports and cryptocurrencies seriously to thrive in the next generation. That’s how Mario Ovcharov, CEO of Ultraplay, sees it. He discussed his company’s history with the esports genre and his views on cryptos with CalvinAyre.com’s Stephanie Tower recently.

Ovcharov is qualified to talk about esports’ future, because it has been embedded in Ultraplay’s genes. “Basically, one of the biggest advantages that we have is that we started our esports journey pretty much before everybody else joined the wave,” he told us. “This was in 2014, and since then, we decided that this will be one of the main focuses of our company. So we brought the product and the offering to a level that esports really deserves.”

What sets Ultraplay apart, when compared to other esports operators, is how comprehensive they are. They provide the extra effort to get as many tournaments and lines offered as possible. Ovcharov said, “We try to be there. [Mainly] we try to cover as many possible tournaments as there are.”

Operators that aren’t already offering comprehensive esports lines are risking getting left in the dust. As the next generation comes of betting age, they are going to look for wagering tied to the growing industry of video games. “Potentially in the next six, seven years, these people will be working adults,” Ultraplay’s CEO said. For operators that don’t start offering esports in that window, Ovcharov says, “No one knows if they’re going to get action or not.”

Ultraplay isn’t just on the bleeding edge of wagering, they’re pushing the boundaries of payment options and technology as well. Ovcharov explained that Ultraplay has adopted cryptocurrencies and blockchain technology as early as 2011. They see it as an important piece of the future. “Whether it’s just a payment for something else, whether it’s an exchange, or a larger infrastructural platform for something bigger, potentially we can partner and make our extension of products better,” Ovcharov said.

There really is no other way into the future without cryptocurrencies, according to Ovcharov. “It’s essential in terms of, everybody understands and knows how to pay with his credit card. With Bitcoin, the good thing is that they can still keep some sort of privacy if they want that,” he said. “In the long run, I’m sure that this will go to a larger scale, where banks and everybody will use the technology…If we push, not only gaming but many of the businesses, towards making payments and accessibility much easier, quicker and secure.”

Stephanie Towers concludes for us all, “Then why not?”