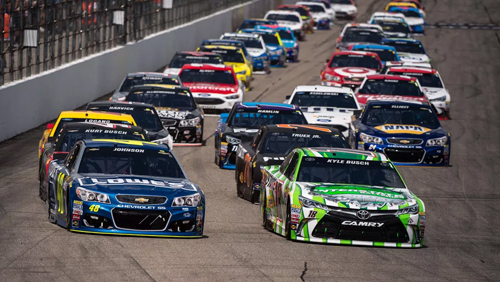 NASCAR announced in January that it was implementing strict guidelines for sports wagers for its members. Members, including team owners, crewmembers, NASCAR officials and drivers, are now banned from placing bets, with fines for non-compliance reaching as much as $250,000. Now, the organization is looking to introduce its own versions of gambling on car races that will include a lottery-type game and live in-race action.

The first deal comes after SpeedWay Motorsports Inc. (SMI), the parent company of NASCAR, inked a deal with EquiLottery Games. Their first joint project will see the creation of a “quick pick” lottery. The lottery is called Car Crash and will see gamblers able to choose three numbers in each live race to participate in the game.

Car Crash tickets will cost $5 and the winning numbers being based on the event winners, instead of a drawing. Prizes are expected to be as much as $50,000.

Which racetracks will offer Car Crash, and when, has not yet been released. However, GMI owns tracks in California, Georgia, Kentucky, New Hampshire, Nevada, North Carolina, Tennessee and Texas, and the game could be made available at all of them. Additionally, GMI hopes to include Car Crash in other states where NASCAR is popular.

NASCAR is also looking to expand on its live race gambling. It launched a trial at the Dover International Speedway in Delaware last year that saw just under 3,000 fans get involved, and is hoping to include other tracks as 2019 develops.

While NASCAR members cannot participate in sports gambling, they’re still allowed to get involved with daily fantasy sports (DFS). As long as the prize limit is no more than $250, DFS is acceptable.

Last month, NASCAR announced that it would begin allowing gambling sponsors and is reportedly now scouting a data partnership deal that would fuel the wagers.

All of the activity is meant to capitalize on the extreme popularity of sports gambling and to help the organization regain some of the fan base it has lost in recent years. Since 2005, what was once America’s second largest sport has lost 50% of its fans at both live events and online. Introducing gambling to the mix should go a long way at recovering those losses.