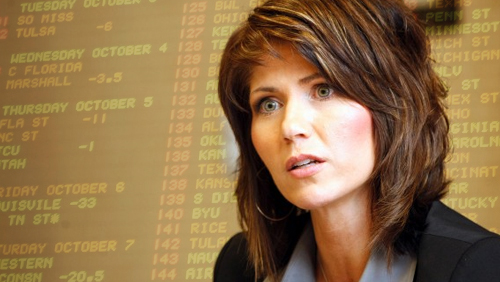 A government committee in South Dakota recently approved a sports gambling bill by a narrow 5-4 margin. The bill, Senate Joint Resolution 2, goes next to the Senate floor and gaming operators in the state are anxiously watching to see how the legislative piece progresses. Even if it is approved by South Dakota’s legislative officials, there is reportedly a huge roadblock ahead and it is positioned at the last stop any legislation has to make before becoming law.

Unfortunately for South Dakotans, they elected a governor, Kristi Noem who is opposed to any gambling expansion in the state. Her stance isn’t too surprising, given that she said in May of last year, “Personally, I’m opposed to expanding gambling, but this issue will ultimately be decided by voters since it will require a constitutional amendment.” Then, she became governor.

The South Dakota Revenue Deputy Secretary, David Wiest, participated in a hearing prior to last week’s committee vote where he talked about sports gambling. He said that the projections of $184,700 in tax revenue for the state were inflated because they were based on what is seen in Nevada. However, he emphasized that Nevada already has a mature sports gambling industry, whereas South Dakota would be building its own.

To that end, Wiest believes the tax revenue would only be around $80,000 – much less than what would be needed to cover the cost of employees to regulate the industry. After voicing his position, Governor Noem commented that he had done an excellent job expressing exactly how she feels about sports gambling in the state.

There is still a little glimmer of hope, however, for sports gambling in South Dakota. Ultimately, Senate Joint Resolution 2 will be decided by voters if it makes it through State Congress. However, it isn’t unrealistic to envision the bill meeting its demise early on, as politicians might be convinced to turn their backs on it in lieu of other concessions that could be offered by Governor Noem.

The debate on Senate Joint Resolution 2 continues this week and there will certainly be much more input from both sides of the sports gambling argument as they try to sway lawmakers.