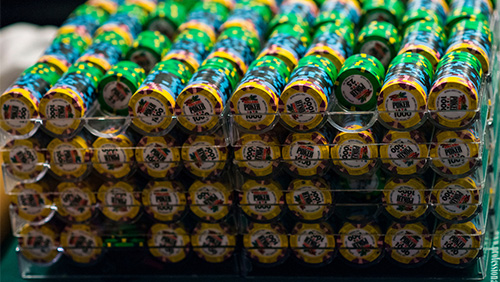 Comedians, Starbucks Baristas or Wall Street traders – it doesn’t matter who you are, Jack Effel and the World Series of Poker (WSOP) want you to complain about the air conditioning during the 50th Anniversary of the most iconic festival of poker across the multiverse.

From May 28 to July 16, cousins, cuckoos and crackpots from six continents will fill up their cable box hard drives, as they ignore life, and participate in 80+ bracelet events.

The WSOP organisers have released the final tranche of live events, and it’s cracking news if paying $1,000 to play in a poker tournament is a tad too fierce.

The team have added ten Deepstack gold bracelet events with a buy-in of less than a grand in a move to attract more recreational players to the Rio. The grand piano in this pack of petite pianists is a $600 buy-in Deepstack Championship event beginning Tuesday, June 25 with a 30,000 starting stack, $500,000 guaranteed prizepool, and a seat into the WSOP Main Event for the winner.

The garage doors are open.

The ‘prestige’ pumping poker pros are revving up their cars in preparation for an all-out assault on the WSOP’s Twitter feed.

Meanwhile, the WSOP adds a second event with a charitable flavour; this time focusing on people who are or have served in the US military. The three-day $500 buy-in No-Limit Hold’em ‘SALUTE to Warriors’ event begins Tuesday 2 July, and ends on July 4, Independence Day. Active military personnel and veterans can enter, starting with a 25,000 starting stack and playing 40-minute blind levels. Proceeds from the event go to the USO and other veteran organisations.

Here is the breakdown of live events:

The WSOP is still to finalise the WSOP.com Online bracelet events.

Outside WSOP bracelet’s territory, there is even more value on offer for fans of the Daily Deepstack with weekly Pot-Limit Omaha (PLO) and Seniors (+50) events.

Here is the full live schedule.

One man who knows how it feels to win a WSOP bracelet is Kyle Cartwright. The Tennessee native beat 2,223 entrants to win a $1,000 No-Limit Hold’em event back in 2014, but it’s the World Series of Poker Circuit (WSOPC) where Cartwright earns his bread and butter.

Cartwright won the 639-entrant $1,700 buy-in Main Event in the Horseshoe Casino & Hotel in Tunica to claim his eighth gold ring. Only six players have more. Chris Reslock also has eight.

It was a special moment for Cartwright because his Mum watched him play poker for the first time. It’s his fourth WSOPC Main Event win, and a much needed one after finishing 2/293 in the $600 No-Limit Hold’em Big Blind Ante event during the same series and finishing runner-up to Jacob Bazeley in the WSOPC Main Event in Cherokee back in December.

Cartwright wins a seat into the 2019 WSOPC Global Casino Championships after his win where he will attempt to win bracelet #2.

Three other stars who played for so long they had their nightgowns on were the seven-time WSOPC gold ring winner, Vincent Moscati (10th), the recent two-time ring winner in Choctaw, Dave Alfa (16th) and the multiple WSOPC ring winner, Joshua Turner (24th).​