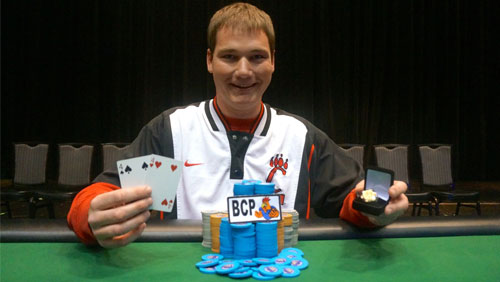 The 31-year old professional, from Cincinnati, defeated the relatively inexperienced Chad Deberry, in heads-up action, to record his first tournament victory since 2009. Bazeley picked up $293,096 and a seat at the season ending WSOP National Championships after his win.

It’s been a long time coming for Bazeley. He has reached no less than seven major final tables in the past three years, finishing runner-up on two occasions, but he finally got the job done in Cherokee. Not that any of that title nonsense bothers Bazeley.

“I never really go by leaderboards and points and stuff like that,” Bazeley told the WSOP. “I’m just more about making money and at the same time having fun and being competitive with it. Winning is winning. I don’t really do it to get points or a ring or anything. I just want to win.”

Bazeley’s victory was made a little easier thanks to two huge hands. The first saw the then chip leader Hai Le six-bet jam, holding pocket jacks, and a gleeful Bazeley lapped it up with pocket aces. That hand gave him over half the chips in play, and he would enter the heads-up phase with a 3:1 chip lead after Caleb Brown moved QQ into Bazeley’s KK whilst three-handed.

“It hasn’t even set in yet,” Bazeley told the WSOP. “I’ve been working so hard to get a win and been so close. Poker, you can get close and you still get paid well, but you don’t get that fully satisfied feeling until you win. Hopefully when this sets in I’ll feel like I’ve accomplished what I wanted to.”

The re-entry format saw 797 entrants create a total prize pool of $1,195,000 (20% more than last year). Trey Walton won the Casino Championships and in doing so also secures a seat in the season ending WSOP National Championships.