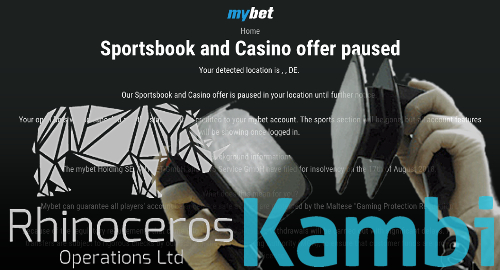 The new owners of moribund German online gambling operator MyBet plans to relaunch its sportsbook with the help of tech provider Kambi.

On Monday, the Malta-licensed Kambi announced that it had signed a deal with Mybet Holding SE’s “new ownership” that will see the relaunch of MyBet’s German-facing online sportsbook. Kambi says MyBet customers should expect the relaunch to take place sometime during the first half of this year.

According to Kambi’s release, MyBet’s “brand and additional assets have since been purchased by a new investment group.” MyBet’s business will henceforth be operated by Rhinoceros Operations Ltd, which operates the Wunderino online casino under a Malta Gaming Authority B2C license issued in 2016.

Last September, Mybet announced that it was ‘pausing’ its online sportsbook and casino “until further notice” after failing to secure a deal with a potential strategic investor. The company had commenced insolvency proceedings the previous month after negotiations with its would-be sugar daddy came to naught.

Prior to those drastic steps, MyBet had pinned its hopes on a proposed restructuring that would have sold off its brand and B2C operations in order to allow what was left of the company to focus on B2B operations.

Kambi says its deal will also allow it to launch online sportsbooks for other Rhinocerous brands. As such, while Kambi expects the MyBet deal to have only a “modest positive impact” on Kambi’s 2019 revenue, the wider deal could provide “a more meaningful contribution” in the years to come.

Kambi CEO Kristian Nylén said his group was excited by the potential of its new Mybet relationship, saying the brand “remains strong” and could regain its former German market glories with Kambi’s help.

Rhinoceros CEO Tobias Carlsson similarly praised MyBet as “one of the pioneers in the German sports betting field” and boldly projected that the new Kambi deal would prove to be “one of the cornerstones on which we will build the future of a great brand.”