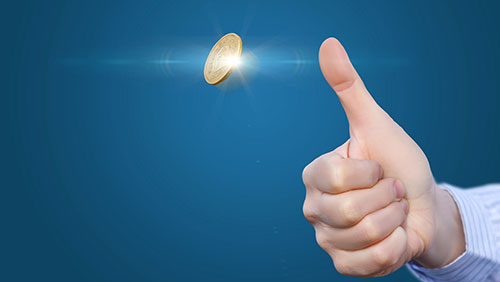 For most sports bets, you aren’t going to get 50/50 odds of being right. However, that’s the case with one of the most popular Super Bowl bets every year: the coin toss. Both options are -105 because, obviously, there’s a 50 percent chance of it landing heads and 50 percent tails. It’s important to note that the prop is on where it lands, not what is called.

The New England Patriots are the visiting team and will call the toss before Super Bowl LIII this Sunday in Atlanta against the Los Angeles Rams, and it’s well-known that usual Patriots caller Matthew Slater calls heads always. The coin toss result has been oddly streaky over the years. Last year it came up heads but the previous four years it was tails. The five Super Bowls before that all came up heads. For one impossible 14-year stretch (Super Bowl 32 through 45), the NFC team won the coin toss every single time.

Another popular pre-game prop is the length of the national anthem, which this year will be sung by R&B legend Gladys Knight. She is given an over/under of one minute, 47 seconds. Take this with a grain of salt, but an alleged recording of Knight signing the national anthem has surfaced from 1991 and she finished in one minute, 45 seconds. That Knight forgets or omits a word during the anthem is +300 with no at -500. Will any player take a knee during the anthem? Yes is +300 and no -500. That type of protest has largely died down in the NFL, but there are still a few players around the league who did so during the regular season.

The Rams had the NFL‘s No. 2 offense and the Patriots No. 4 in the regular season. There’s a prop on whether any scoring drive takes less time than Knight does to sing the national anthem. Yes is the -140 favorite. Any special teams or defensive touchdown is going to go under Knight’s mark. Or, perhaps, a two-minute drill type drive at the end of the half (or game) that results in a field goal.

One big storyline of the Super Bowl is that the Rams’ Sean McVay at age 33 is the youngest-ever head coach in the game. There’s an over/under of 1.5 times his age is mentioned during the CBS broadcast. You know it’s going to happen at least once, and that’s why the over 1.5 times is the -190 favorite.