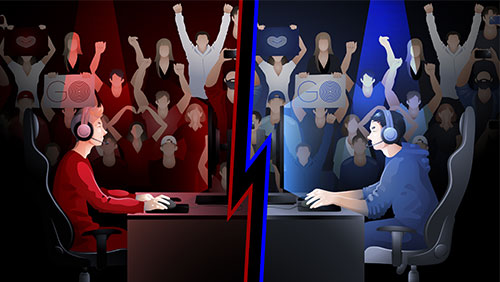 “We don’t particularly embrace games where the objective is to blow your opponent’s head off,” said Emmert.

Luckily, for Esports fans who like a punt, Loot.Bet has a different perspective on the whole head blown off thing. The Esports speciality bookmaker is exploring the value of hosting leagues of their own, with the company’s loudspeakers blaring out news of  Counter-Strike: Global Offensive (CS:GO) and Dota 2 leagues.

According to the Esports digital rag Dot Esports –  teams from across Europe and the Commonwealth of Independent States (CIS) have already begun open qualifiers for the inaugural CS:GO season, which will be the first of five scheduled.

The winner of the open qualifier will compete in the closed qualifier, with the winner of that natural disaster riding a tsunami all the way to the Main Event and the opportunity to win a piece of a $30,000 prizepool.

The closed qualifiers run from Jan 28 to Feb 2, and the Main Event takes place Feb 4 – March 4, with the final four teams taking part in a double-elimination play-off, March 5 to 8.

The Dota 2 league is scheduled to commence in the spring, and there will be four seasons with a $25,000 prize pool pencilled in per season. Loot Bet plan to give away prizes such as laptops, and other gaming hardware through the platforms and streams connected with both leagues.

Let’s Work Together to Clean up Esports Betting

If you’re going to have a flutter on Esports, then Fnatic wants you to do it right. The London-based Esports organisation whose teams compete in CS:GO, League of Legends, Dota 2, and Heroes of the Storm events, has released a blog post carrying the above title, focusing on how to find a legitimate bookmaker.

The blog post is short and not so sweet, raising awareness of what it states is an ‘increase’ in Esports fans betting on unlicensed Esports betting websites, singling out Skins-Betting and Skins-Casino sites for a particular hammer over the head.

Advice includes checking the footer of a gambling website for evidence of a license, a list of reasons why you should care that your dollar is going to an unlicensed bookmaker, and not a licensed one, and that’s about it.

In August, Fnatic partnered with the Esports betting platform Rivalry, hence the interest in being prim and proper.

Here are the resources that Fnatic suggest you look into.